I am writing to you as the national Anti-Defamation Chairman of the Ancient Order of Hibernians, at 35,000 members the largest and oldest Irish Catholic Organization in America, regarding the recent comments by President E. Gordon Gee of Ohio State University.  As you are no doubt aware, President Gee made comments at the school’s athletic council concerning negotiations that he had with the University of Notre Dame where he stated “You just can’t trust those damn Catholics on a Thursday or a Friday, and so, literally, I can say that”.

The Ancient Order of Hibernians was founded in 1836 to combat pervasive bigotry of self-styled “native Americans” and members of “The Know Nothings” who attacked Catholics not only through bigotry and discrimination, but often with physical violence.   A frequent charge of theirs was that Catholics could never be “true Americans” as they were untrustworthy.  How sad it is to see in the 21st century those very same 19th century accusation being made by a man in whose trust is placed one of our nation’s premier educational institutions and the nurturing of young minds.

It is also highly disturbing that these remarks are reported to have been made at an Ohio State University meeting in December 2012 and that only now in May 2013 has Mr. Gee issued an apology and the University trustees put him on a “remediation plan”.  Frankly, this delayed action smacks of damage control for the media, rather than a sincere effort to address a bigoted insult to Catholics.  Of course President Gee, and sadly some university administrators defending him, has resorted to the favorite excuse of bigots when their prejudices are drawn into the spotlight of public outrage:  that their prejudicial remarks “were a poor attempt at humor”.     Very few people end a “joke” with “so, literally, I can say that“.  I presume that trained as a lawyer President Gee is sufficiently versed in the English language to know that phrase is a strong affirmation of belief.   As you are aware Governor Kasich, this is not the first time President Gee has made prejudicial remarks, including remarks defaming the Little Sisters of the Poor and Polish Americans.  I am incredulous given President Gee’s obvious intelligence, as testified to by his curricula vitae, that these serial offenses are indeed “accidents.”

I also have grave doubts of the efficacy of any proposed on the job  “remediation plan”, especially when said plan is being administered by a University administration  that has been complicit in turning a blind eye to these remarks for several  months  until they came to national attention.   I am somewhat shocked that it is reported that in a letter from the Board of Trustees to Mr. Gee on this matter they state “Although we do not believe that you intended harm, such comments risk diminishing the effectiveness of our collective efforts and of your good work.”  It appears from this statement that the main concern of the trustees is not Mr. Gee’s egregious remarks concerning Catholics, but rather that the media attention may impair Mr. Gee’s ability as a fundraiser (for which he is an acknowledged master).

As Hibernians and Catholics, one of our core principles is Christian charity, or perhaps as Adlai Stevenson once put it “The forgiveness of sin and the redemption of ignorance.”  While we will pray that Mr. Gee may develop enlightenment, sensitivity and judgment, we do not believe that a person currently lacking these qualities should continue in a leadership role at an institution whose mission is to shape young minds.

I close by asking you Governor two simple questions.   First, if Mr. Gee was to make these defaming remarks concerning Muslims or Jews, would he still have a position at the University?  Second, why should remarks prejudicial to Catholics be treated any differently?

I look forward to your thoughts on this matter. 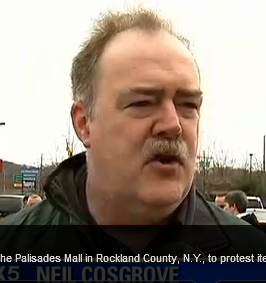 John Carey – OSU Board of Regents