The Great Hunger that took place in Ireland from 1845 – 1849 literally changed the face of the Emerald Isle forever. During this time period over one million men, women and children died from starvation. At the same time, many Irish men women and children emigrated to Britain, Canada, and the United States in the hope of escaping this horrific tragedy that had befallen their native land. In reality, though the potato blight did happen, there was plenty of food in Ireland that could have fed, and more than likely saved the million plus who died. The wealthy landowners in Ireland shipped their crops and other edible food items to England and the other parts of the world for profit.

In remembrance of this dark period in Irish History, in 2003 AOH National President Ned McGinley and the National Boards of the Ancient Order of Hibernians and Ladies Ancient Order of Hibernians established the Hibernian Hunger Project as a means to honor those who had died during the Great Hunger; to educate Irish America and beyond about the an Gorta Mor; to help with the hunger problem in the US and to show the generosity of the AOH and LAOH membership.

The first AOH National Hunger Project took place in March 2003 and Divisions, County and State Boards were requested to participate. The reason March was selected was not because it was Irish Heritage Month, but rather because traditionally it is a time when food banks and soup kitchens are low on food supplies after the winter months. Many Divisions and Boards enthusiastically responded to this call to action and resoundingly demonstrated the generosity of the AOH and LAOH. It is in this spirit, that today why many Hibernians volunteer throughout the year at soup kitchens and food pantries.

The Hibernian Hunger Project as noted above also serves as a means to educate our membership and America about what really took place in Ireland 170 plus years ago. For many Americans, this was the first time many had heard the Great Famine referred to as the Great Hunger, and now today, 17 years after the Hibernian Hunger Project was initiated, Irish America. is more attune as to what really occurred in the late 1840’s in Ireland.

Certainly, the Covid-19 pandemic that has engulfed our country and the world, has drastically changed. the economic lives of many. Many Hibernian Divisions and Boards were among the first to step up to the plate by initiating food drives, donating money and food to local food pantries and shelters to help their fellow citizens during these challenging and urgent times of need, and still continue to do so today.

For 17 plus years the AOH Hunger Project has been the impetus for Hibernians throughout the US, to provide for community outreach and to be part of the solution to combat hunger in the US, truly exemplifying the AOH motto of “Friendship, Unity and Christian Charity” at its best!

In future Digest articles, Web Blasts and Posts, we would like to showcase Hibernian Division, County and State Boards efforts on just what they are doing to combat hunger in their areas. However, for this to happen, we will need your help! Please email us a short article on an activity that your Division, County or State Board has done to combat hunger. Whether it be a food drive, volunteers helping out a food pantry, soup kitchen, fundraising or similar event, these stories are needed to show the good works being done by our members. As they say, a picture is worth a thousand words, so please email us your photos along with your story. Please send these articles and photos to: williamjsullivan@verizon.net Thanks! 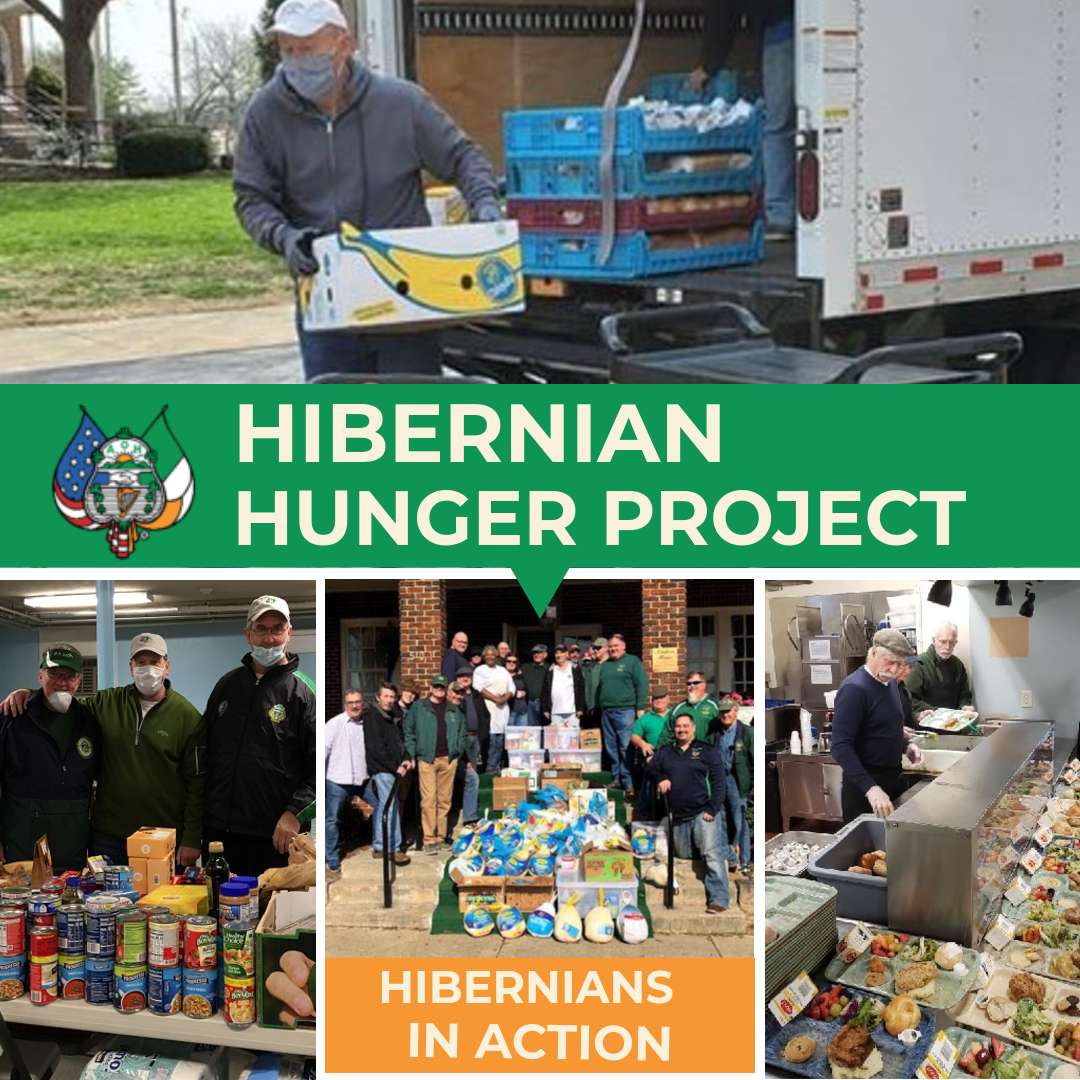 The AOH National Board will present a total of $10,000 in Awards to Divisions who have developed Hibernian Hunger Projects that help to eliminate hunger in their communities. The award for First Prize is $1,000, and there will also be additional Second Prizes of $500 each.