In a few short weeks, millions of Americans, particularly children, will be engaged in the joyous celebration that is Halloween. This festive holiday is another of the gifts that Irish Immigrants have brought to America; its origin and customs dating back to the ancient Gaelic holiday of Samhain, which was not only the start of that culture’s new year, but had as its central message the struggle between the forces of light and darkness. It is with this in mind that the Ancient Order of Hibernians asks that all its members, their families and friends to boycott Spencer’s Gifts affiliate Spirit Halloween stores when making their Halloween purchases. 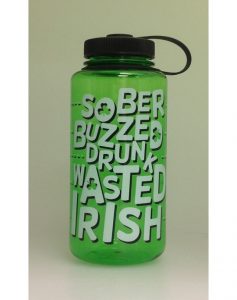 Spencer’s Gifts has a long and well established history of exploiting negative stereotypes and tropes targeting Irish Americans. Among the items recently sold at Spencer’s were clothing emblazoned with such phrases as “F**K Me, I’m Irish”, “Irish Girl Wasted” and a shamrock festooned shirt with “Everyone Loves a Drunk Slut” among other items denigrating Irish Americans. Spencer’s Website is currently selling an “Irish Chug O Meter” beverage bottlewith the settings “Sober, Buzzed, Drunk, Wasted, Irish”, another cup emblazoned “Drink Til You’re Fu**n Irish”, and perhaps the winner in setting a new low “Your Mom is not Irish, but I F**KED her anyway”. All Americans should be outraged at such ethnically based stereotypes, but additionally outraged that at a time when our nation is having serious discussions regarding sexual abuse and domestic violence Spencer’s products are promoting a message conflating binge drinking and an abhorrently demeaning image of women.

When in the past called to account for this promulgation of bigotry and defamation in pursuit of profit, Spencer’s spokesmen have often invoked the “It’s only a joke” defense. It is interesting to note that it appears to be only the Irish that Spencer’s Gifts singles out for such “humor”; it appears to be only our proud heritage that is profaned for profit. Spencer’s has dismissed the protests of the Hibernians as we attempt to defend our culture and our heritage by saying we are not reflective of their demographic; i.e. that since most Hibernians have too much taste and sense to shop in Spencer’s they can ignore our just and valid concern as they pursue their target audience of 18-24 year olds (half of whom are under age yet are being targeted by Spencer’s binge drinking message). It is with this in mind that we ask you to boycott Spencer’s affiliated Spirit Halloween stores.

Spencer’s Spirit Halloween stores, which pop up in unused retail space in shopping malls during the month of October, account for fifty percent of Spencer’s annual revenue of $250 million dollars. No doubt some of the profits earned this October will be used to purchase the merchandise that will be for sale in Spencer’s in March denigrating our noble heritage. While we may never shop in Spencer’s, we likely do, particularly as parents and grandparents, make Halloween purchases. Sending a message that their defamation of the Irish in March hurts their bottom line in October at their lucrative Spirit Halloween shops should cause Spencer’s to rethink their St. Patrick’s Day merchandise choices as they place their orders now for March.

We ask that you make an informed decision to not subsidize defamation of Irish Americans in March by patronizing Spencer’s Spirit Halloween Stores in October, and ask your friends, irrespective of their heritage, to join us in saying there is no room in 21st Century America for the bigoted “Know Nothing” stereotypes of the 19th Century by choosing another retailer for their Halloween purchases.