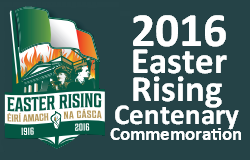 As you may be aware our National President appointed me as Chairman of
the Centenary Committee in order to organize the remembrance events in March and
April of next year.

To coincide with our plans, all State Presidents will be receiving a
monthly newsletter which will give you an historical sequence of events that led
to the rebellion and executions in 1916.

We would like you to disseminate this among your Divisions and have them
read and discuss at each Division meeting during that period of time.

You also will be receiving a copy of the Irish Proclamation of Freedom
from our National Secretary Jere Cole. He will be mailing one per Division and we
would like for you to hand them out at your state convention.

As you may know, the National Ancient Order of Hibernians in America
will celebrate the Centenary of the Easter Rising in New York City on April 23, 2016,with
a Mass at St. Patrick’s Cathedral. A piped procession will follow from the cathedral
to the plaza on Park Avenue where the office of the Consul General is located.
There will be a reading of the Proclamation and speeches to commemorate the 100 year
Anniversary. I am including the minutes from our last Uprising Committee to give
you an idea of the plans in the works.

Please don’t forget to inform your Divisions that those not in New York
should plan to do some type of remembrance on Saturday April 23rd in their particular
cities and states with a reading of that Proclamation preferably after a Mass or
some type of appropriate celebration. Also we will be sending you a copy of the
schedule of events that the Dublin Government has disseminated for their Centenary
activities in Dublin for the months of March and April.

Wishing you well for the rest of the year and successful state conventions,
will see you soon.

The Hibernian Rifles in Ireland