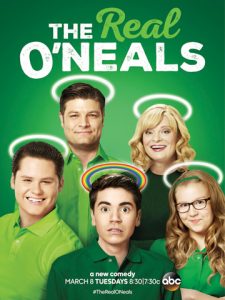 New City, New York – 3/3/14 – The Ancient Order of Hibernians calls on Disney/ABC to immediately apologize for the bigoted, stereotype ridden portrayal of Irish Americans and the denigration of the Catholic faith as depicted in their alleged comedy “The Real O’Neals” and to cancel this show which defames Irish Americans and mocks the Catholic faith.

“We are outraged that Disney/ABC television has seen fit through its program “The Real O’Neals” to turn back the clock and engage in one of the worst examples of media bigotry targeting Irish Catholics since the days of 19th century ”The Know Nothings”. There is nothing either “real” or funny about the “Real O’Neals”; it is the 21st century equivalent of the bigoted cartoons of Thomas Nast that depicted Catholic Bishop’s as attacking alligators and the Irish as mindless ape-like creatures.

The show is a litany of prejudicial Irish and Catholic media clichés. The sanctimonious, overbearing Mother who uses a statue of the Virgin Mary to ensure the lid is put down on the toilet (in fact there is not an adult Catholic woman character in the entire show who is not depicted as a mindless hypocrite). We have the stereotype of the crassly insensitive father “Pat” who is of course a cop. We are presented a daughter who steals under the pretense of collecting for Catholic Charities by using Catholic guilt as a shakedown device. The oldest son is a jock with anorexia (for we all know how funny suffering with a serious eating disorder is) with a Tarzan like vocabulary, but whom the mother hopes through her fawning flattery of the Bishop to get into Notre Dame.   The youngest son is an implausibly naive gay dominated by his mother; the shows comedic trivialization of his coming out (using the shameless Catholic trope of a bingo game as a setting) is a disservice to people of all ethnicities and faiths dealing with this issue. This is what Disney/ABC would have viewers believe it the “The typical Irish Catholic family”.

It is hard for us to believe that the executives of Disney/ABC would produce such an exercise in religious intolerance if the subject was other than Irish Catholics. We ask Disney/ABC would they sign off on a plot line that saw pancakes served in the shape of the Prophet Mohammed or depict him, as Jesus was in a cameo, as a “Wayne’s World” like dude? We think, and would hope, not. Why then is it acceptable to ABC executives to denigrate the faith of Christians? With the release of the “Real O’Neals”, Disney/ABC highlights the hypocrisy of Hollywood and the media where Irish and Catholic Americans are “fair game” for the perpetuation of bigoted stereotypes while other groups are surrounded in a cordon of Political Correctness.

We can anticipate that there will be those who will attempt to defend Disney/ABC by pointing out the network is dominated by other ethnic “comedies” such as “The Goldbergs”, “Blackish” and “Fresh Off the Boat”; that ABC is an equal opportunity defamer. “Comedy” based on prejudicial ethnic stereotypes and tropes are as dated as Disney’s “Tomorrowland” attraction irrespective of the heritage defamed. There is something both equally pathetic and offensive that ABC is now promoting their Tuesday lineup as “The funniest night of Chinese/Irish Catholic Comedy on TV”. Thankfully it is the only night of such bigoted, trope ridden alleged comedies and we hope that the other networks will not follow Disney/ABC’s misguided path in a race to the bottom, a contest no one should want to win. We must also note that unlike the other comedies, “O’Neals” executive produce Dan Savage has a well-documented hostility to the Catholic Church and question the wisdom and motivations of Disney/ABC giving him a national platform to perpetuate his intolerance.

That ABC has chosen to launch this defaming outrage 24 hours into our nation’s recognition of “Irish American Heritage Month” is despicable. At a time when we should be celebrating Irish Americans such as Commodore Barry, Mother Jones, and real Irish American families such as the Sullivan Brothers, Disney/ABC has chosen instead to plumb the lowest depths of intolerant stereotypes. There is nothing “real” about the “Real O’Neals” other than “real” and unmitigated defamation and bigotry.”

The Ancient Order of Hibernians calls on Disney/ABC to issue a complete and unconditional apology for this scurrilous attack on Irish and Catholic Americans and to discontinue this show which attempts to wrap defamation and intolerance in comedy. The Hibernians further asks its members and all Americans who believe that there is no room in 21st century America for the hateful bigotry of the 19th to contact ABC TV President Ben Sherwood at Ben.Sherwood@disney.comor by Twitter @bensherwood with the hashtag #CancelRealONeals.

The Hibernians call on its 40,000 members and our fellow Americans of all ethnicities to send a clear message to Disney/ABC that there is no room in the America of the 21st century for bigoted ethnic based stereotypes no matter who the target is.