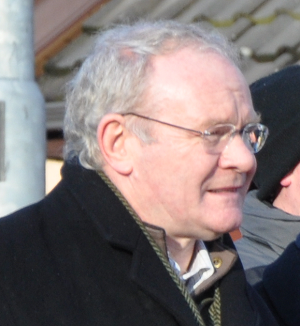 On January 9, 2017, Martin McGuinness resigned from the role of Deputy First Minister that he has held for ten years.  During his tenure, Mr. McGuinness and Sinn Fein have worked tirelessly for the betterment of all communities of Northern Ireland.  However, the continuing intransigence by members of the DUP to embrace the core principles of equality and respect that are the basis of the Good Friday Agreement, the growing litany of corruption scandals and the DUP’s failure to take accountability and deal effectively with a crisis of confidence in the institutions of government amongst the people of Northern Ireland left Mr. McGuinness no option but to resign or be complicit in a travesty.  The AOH supports Mr. McGuinness’ decision and hope that his principled decision will result in real reform and a return to the principles of the Good Friday Agreement.

“Nearly two decades ago, the United States was pivotal is brokering one of the great triumphs of diplomacy, the Good Friday Agreement, paving the way to end the conflict known as “The Troubles”, proportionately one of the deadliest in human history.  The Good Friday Agreement started the communities of Northern Ireland down the long road to peace with much promise. Nearly ten years ago  a milestone was reached previously bitter adversaries Martin McGuinness of Sinn Fein and the Reverend Ian Paisley of the Democratic Unionist Party (DUP) joined in partnership to forego the habits of violence and  embrace the institutions of government founded on equality, mutual respect and the holistic view of Ireland  enshrined in the Good Friday Agreement.

While the Rev. Paisley’s journey down the road to peace was short lived, forced out of the DUP he himself founded by elements who could not embrace the challenges of change, Deputy First Minister McGuinness has continued to walk that path with a succession of DUP First Ministers and British Governments; it has not been an easy journey.  It is clear that far too many members of the DUP are still clinging to the past rather than embracing the future.  At times First Minister McGuinness has challenged some of his republican and nationalist supporters in his attempts to bridge the divide between communities, but one cannot build a bridge if one does not extend beyond the safety of one’s own shores.  Sadly, far too often as Deputy First Minister McGuinness attempts to build bridges he has been reciprocated by the construction of bunkers by members of the DUP.  The continued churlish behavior of DUP members to anyone who expresses an Irish identity, specifically those who wish to embrace the Irish language, are more in keeping with the imperial attitudes of the 19th century rather than the 21st. The slashing of funding for a scholarship program to enable students to study the Irish Language on Christmas Eve while proposing six times that funding for the flute bands of the loyalist community is as rooted in cowardice as it is in cultural triumphalism.

Against this backdrop, the people’s confidence in the institutions of government in Northern Ireland has been rocked by a series of corruption scandals: Red Sky, the sale of the NAMA “Project Eagle” real estate portfolio and most recently the Renewable Heating Initiative (RHI).  All have seen allegations of corruption and collusion involving senior members of the DUP up to and including the office of First Minister. The current RHI crisis intricately involves First Minister Arlene Foster who administered the program in her former capacity as Minister of Enterprise Trade and Investment.  It has now become clear that the poor architecture of the program and poor administration have resulted in an estimated cost overrun of £450m that threaten to destabilize already strained funding of public services for decades.  Given the rightful public anger over this latest in a series of corruption scandals, measures must be taken to assure the public of transparency and accountability if the institutions of government are to retain their confidence.  Deputy First Minister McGuinness and Sinn Fein have noted that First Foster cannot act in an executive capacity in an investigation of mismanagement in a program she administered without a perception of a blatant conflict of interest.  Deputy First Minister McGuinness has offered that Ms. Foster step down without prejudice while the investigation proceeds to reassure flagging public confidence in the institutions of government.  Sadly, this recommendation, grounded in the public good has been rebuffed by Ms. Foster in a series of ad hominem attacks. In doing so Ms. Foster has made clear she places personal pride and parochial party politics ahead of the people she is sworn to serve.  Ms. Foster’s response left the Deputy First Minister no alternative but to resign or to be guilty of complicity in a farce that would irreparably destroy the credibility of the institutions of Government in Northern Ireland.  After ten years spent working to build a better Northern Ireland for the people of all communities this could not have been an easy decision for First Minister McGuinness and we commend his courage and integrity.

The collapse of the government in Northern Ireland occurs at a time when the bright prospects of the Good Friday Agreement are already under great strain.  The British Government, a co-guarantor of the agreement, has forsaken its responsibilities under the agreement; specifically their intransigence in addressing the legacy issues of the past so as to allow the people of Northern Ireland to look to the future.  The British Government has embraced Brexit indifferent to the desire of the people of the North to remain in the European Union. Britain has dismissed the concerns of the people of the island of Ireland regarding the prospect of the imposition of hard borders  and the chilling effect that would have on the peace process. Brexit also means the loss of the protections of the European Convention on Human Rights (ECHR), and highlights the failure of Stormont to work toward a Bill of Rights for the people of Northern Ireland as called for in the Good Friday Agreement. Statements by British Prime Minster Theresa May characterizing Britain opting out of the protections of the  ECHR as “British soldiers will never again face a legal witch hunt” is callously tone-deaf to the pain of the families of victims of the Ballmurphy Massacre and Bloody Sunday who four decades on are still waiting for members of the Parachute Regiment to be held accountable.

The U.S. must bear some accountability for the crisis that may see the promise of its great diplomatic triumph in the Good Friday Agreement squandered. After achieving one of the great achievements in the history of diplomacy, the U.S. Government was all too premature to declare “mission accomplished” and disengaging while the hard work of implementation was still a work in progress.  For two presidential administrations, representing both political parties, there have been no questions asked as to the lack of progress on key elements of the Good Friday Agreement, specifically of the U.S.’s closest friend and ally Great Britain.  If the U.S. does not hold Great Britain accountable for the failure to live up to its obligations under Good Friday who will?

Yes, Northern Ireland has been relatively peaceful, but there are many forms of peace.  Currently in the six counties we have the fragile, transitory peace that is the lack of violence; the permanent peace created of mutual understanding, dignity and respect as yet to be achieved.  The former is too often transitory; the latter contains the seeds of permanence. It is a matter of national prestige and credibility that The United States government re-engage all the parties to the historic agreement it help broker and hold them all to account if the lasting peace envisioned under the Good Friday framework is to be achieved.”