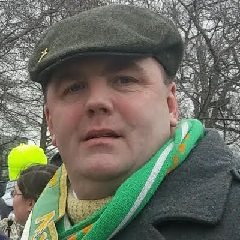 It’s no secret; Our Order has seen a substantial decrease in membership over the last ten years. Many factors attribute to the decrease; aging membership, lack of interest, failure to engage members, changes in society, generational differences, lack of recruiting, just to name a few. Take your pick, every division in the country has run into one, if not all of these problems. So let’s look at ways to solve some of these problems:

Problem: Aging Membership:   We need younger Members who are willing to ensure that Our Order will continue in the future.
Answer:   Customize your local recruiting efforts to find and attract younger members. Use of technology such as social media is a good place to start. The local Irish Music Festival is a great place to find young people. Another idea is to host an event called “Theology on Tap”. This event is a discussion led by a local Clergy Member about Catholic issues. This could take place in the local pub or Division hall (hence “On Tap). Advertise the event and recruit at the event. This event can be co-organized by the Division Organizer and Catholic Action Chairman.

Problem: Changes in Society:   The Catholic Church has seen a sharp decrease in weekly Mass attendance in the last decade, not to mention the decrease in Clergy.
Answer:   Engage your local Parishes. Make the AOH presence known. Every Church should have a recruitment poster in the lobby. Consider running a “Clergy Dinner”, where your Division sponsors a dinner to which all local Clergy are invited. The Clergy are educated about the great works of Our Order. Through this the Clergy become recruiters for the AOH in their Parishes. This event also allows us to show our gratitude to our local Clergy. (Thank to National Director Denny Parks for this idea, see Denny for more details).

Problem-Generational Differences:   The age-old problem. The generation that is going to be the future of Our Order is referred to as Millennials. Born between 1982 and 2004, this generation is often associated with technology and social media. Although some may think of them as smart and brash, this generation has social awareness and a sense of giving back to their community
Answer:   Steer your Division into Community improvement activities. Natural disaster recovery, community clean up days, food drives, and volunteering at community events. Not only does this achieve our charitable mandate, but increases public exposure and draws Millennial’s in.

Recruitment Awards
The National Board has approved the National Organizers Awards.

Percentage of Growth Award:   will be awarded to the Division who has the highest Percentage of Growth of Membership between the period of January 1, 2016 and December 31, 2017, based upon per capita membership. The National Secretary will determine the winner with information received from AOH Form 11. This form is submitted annually by Divisions to the National Secretary. This Award is a traveling Trophy and bragging rights. This Award will be presented at the National Convention in Louisville, Kentucky.

Largest Membership Increase Award:   will be awarded to the Division who has the largest membership increase between the period of January 1, 2016 and December 31, 2017. This will be based off of AOH Form 11 submitted to the National Secretary. This Award is a traveling Trophy and bragging rights. This Award will be presented at the National Convention in Louisville, Kentucky.

Recruitment Materials
Posters, Flyers and Stand-Up Placards for recruitment will be available through your State President or State Organizer beginning February 1st. I am working on designing Organizers Kits to be used at Fair Festivals and Public Events.

Leadership and Recruitment Seminar February 25, 2017
The National Board will be sponsoring a Leadership and Organizing Seminar on February 25, 2017 from 10:00am to 4:00pm at the Gloucester County AOH Hall, 200 Columbia Blvd National Park, NJ. Please attend this exciting opportunity, which will include the following topics:
-Roles and Responsibilities of Officers
-Blue Book Review
-Mentoring and Fostering Tomorrow’s Leaders
-Forms and Paperwork Review
-Grassroots Organizing
-Finding Our Future
-Retention Techniques
-New Technology

This seminar is open to all members. For future leaders and aspiring officers it’s an opportunity not to be missed.