“My March Each Year Is A Work of Mercy”

Growing up as a public school kid in New Jersey, the March for Life was something I only heard about in our church bulletin once a year.  It took until college at Catholic University for me to fully understand the reason behind the March; but even then I was critical of the effort, believing students were more eager to get a ‘day off’ than stand up for the unborn.  While the numerous high school students sleeping in CUA’s gymnasium were impressive, I still felt most were either forced or coerced into attending a rally for issues they didn’t fully understand.

Unfortunately, these opinions remained until 2008 when a friend of mine returned to campus as the leader of a youth group participating in that year’s march. Over a reunion drink, we talked about the next day’s activities, his group’s participation, and why so many descended on Washington each year. He asked me why I had never marched. I responded that I found it pointless to participate in a rally that held little to no chance of overturning the legal decision that caused its creation. He answered that marching was a work of mercy, that they stood as witness for those unable to do so themselves. It was a statement that would profoundly affect my future and the way I viewed the March for Life.

We Stand As Witnesses
Every January, we gather in Washington D.C. for a simple yet noble purpose. We stand as witnesses for those unable to do so themselves and those who never will. My friend made me realize that repealing Roe v. Wade is a long term goal, one that won’t be achieved through marching but through the conversion of hearts and minds to a pro-life position. That conversion needs to start somewhere and it must be supported; THAT is why we march each January.

My opinions have thankfully changed since college. I now view the participation of students and young people as an opportunity to foster charity and sympathy within their conscience.  The impulse to defend the young of our species runs strong in humanity, but we have erected false barriers between those born and unborn. There is no better way to tear down these false walls than showing public support for life while performing a work of mercy.

Join Us for The Pro-Life Breakfast, Join Our Work of Mercy

On Friday, January 27, 2017 you have an opportunity to stand witness for the most vulnerable among us. At 9am Hibernians will gather at St. Mary Mother of God Church (727 5th St NW, Washington, DC) for a Pro-Life mass, immediately followed by our annual Pro-Life Breakfast at the Irish Channel ($25/pp; 500 H Street NW).  Please endeavor to join us afterwards as we participate in the March for Life.

The march rejuvenates our hearts as we grow closer to Jesus through our corporal and spiritual works of mercy. With each step we help mourn a soul that never got the chance to truly live; every prayer said for the living and unborn is heard by God; every man and women seeking comfort from injury or doubt finds a network of support; each participant, slogan, and sign implores our society to respect and protect the gift of life at all stages. Mercy is indeed the watchword of our march, mercy granted by a most forgiving and loving God.

As you ruminate on your goals for the New Year, consider adding one more to your list and then complete it! Stand beside your Brother and Sister Hibernians this January 27th as we demand protection for life in all stages and forms. I look forward to seeing you beside me. 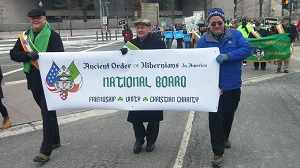 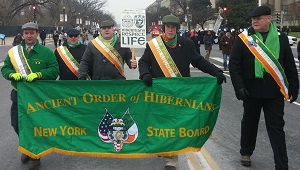