Robert ‘Bob’ Monteith was the third son of four with five sisters born March 1, 1879 in Newtownmountkennedy, Co. Wicklow to Joseph (Cavan) and Mary Dillon (Wicklow) Monteith. He was baptized in the Episcopal Church in the diocese of Glendalough. At 16, he joined the British army claiming to be 18. After seeing action in India and Africa, he was honorably discharged on 21 March 1903. Back in Ireland, he secured a job in the Civil Service at an Ordinance Depot in Dundalk, Co. Louth. On weekends would cycle to Dublin to see his parents and siblings. One weekend, they took in a theater presentation and Bob was smitten with the star of the show, Mary Florence Burke. He wrote her often, but to her he was just another Stage-Door Johnnie. She married her dancing partner David McEvoy and gave him three children: Josephine, Florence and David Jr. David sailed to Canada seeking a new home for his family and Bob had apparently seen the last of his heart-throb. Sadly, David was murdered in a robbery leaving Mary a widow with three children.

Mollie, as she was known to friends and family, was devastated, but having been raised in a Catholic Fenian household, she was made of sterner stuff. She got a job at the Gaiety Theater, often playing bit parts in stage presentations. Then one day, she was introduced to Bob Monteith by a mutual friend. It was the introduction he had been praying for. His cycling trips to Dublin now ended at the Gaiety Theater more often than his parents house and he took Mollie and her three children on picnics on Sunday afternoons. He proposed to her time and time again, but she refused as he was a loyal Irish subject of the Crown and she was a staunch Irish republican. Further, his Protestant family was opposed to the match.

Bob offered to convert for her sake, she finally relented and they were married in 1907. Bob was estranged from his family for marrying a Catholic, but that was softened by the welcome he received from Mollie and her kin. Mollie presented him with their first child, Ethel May Violet on May 17, 1910. The family moved into a small house in Dublin and Bob got a job at the Ordinance Depot there. Amid much unrest in Dublin, Bob became aware of the abuse suffered by the Irish people under Crown policies. Mollie no doubt was a contributing influence. Nevertheless, all seemed to be at ease with the Monteith clan until that awful day in 1913. Returning from the store, young Florrie was caught in an RIC baton charge against James Connolly’s striking workers and was struck on the head. Furious, Bob went to see Connolly offering to join his Citizen Army; Connolly referred him to Tom Clarke of the IRB. Clarke, recognizing Bob’s military experience, advised him to wait and join the Irish Volunteers which was about to be formed. On Sept 29, 1913, Mollie gave Bob another daughter, her name was Patricia Alice. Two months later her daddy was the Captain of A company, First Battalion of the Irish Volunteers.

0n 26 July 1914, Clarke sent Bob to address a rally and draw British attention away from a gun-running that was taking place in Howth. Bob later brought many of the rifles to his home and Mollie hid them all over the house. Later in 1914, the British asked Bob to re-enlist and he refused. He told the recruiting officer I have thrown my lot in with these boys in their fight for Irish freedom. Thereafter, he was fired from his Civil Service job and banished from Dublin on 14 November. Clarke had the O’Rahilly drive him south out of Dublin. Upon reaching Limerick, Bob was given the job of drilling the local Irish Volunteers by John Daly, a former Fenian prisoner with Clarke and uncle of Clarke’s wife, Kathleen. After a year of secret meetings with his family who rode down to Limerick, Clarke told Bob he was needed in New York. John Devoy and Roger Casement had been making arrangements with the German government to supply arms to the Irish Volunteers and Casement was sick in a Berlin hotel. Bob was needed to go to Devoy and then to Berlin to assist Casement.

In early September 1915, Bob arrived in America and rented a flat at 382 East 137th Street in the Bronx. Mollie and the children arrived on 22 September. On 6 October, he left for Germany as a stowaway on SS United States. Captain Bob Monteith of the Irish Volunteers did his best to convince the General Staff of the German War Office to honor Casement’s plan. He wanted to return to Ireland in advance of the arms shipment to prepare for the landing, but the Germans refused since the shipment was less than requested. Further obstructed by the Irish Military Council’s insistence on an unworkable delivery schedule, American intelligence alerting the British to the shipment, and the failure of the Kerry Volunteers to be notified and trained to receive the arms when they arrived, the delivery failed.

Casement, Monteith and a Sgt Beverly were sent on a submarine that accompanied the ship AUD carrying the arms. When no signal came from the shore upon arrival, they were dispatched in a lifeboat that capsized and stranded them on the lonely Banna Strand about 9 miles from Tralee. Casement was too sick to travel so they left him in an abandoned fort and, cold and wet, they headed for Tralee to fetch a car that would take him to Dublin. When they arrived they learned of Casement’s capture and the seizure of AUD and the arms. Capt Monteith and Sgt Beverly were now being sought as Casement’s accomplices and went on the run in the Kerry hills where they learned that the Easter Rising had also failed.

In the Spring of 1916, Mollie moved the family to Yorkville and remained in touch with Devoy and O’Donovan Rossa. She was later forced to move to a less costly third floor apartment on Third Avenue near 116th Street. She read the newspapers anxiously searching the news from Ireland every day looking for Bobs name and seeking, in vain, any word of his welfare from Devoy and his contacts. Had she lost another husband?

For the answer, go to NYAOH.COM and link to Historical Happenings. 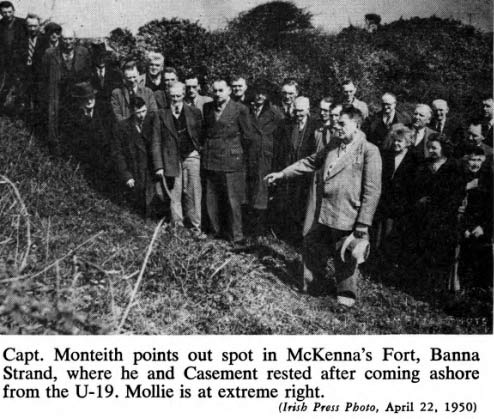