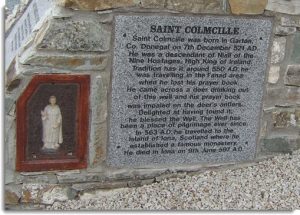 On 12 May, 563, Saint Colmcille established a monastery on the island of Iona.  Thirty-four years later he died on 9 June 597, which is his universal feast day.  In that short time, he exceeded the herculean task that he had set for himself of bringing 3,000 souls to Christ. The story of how and why this all came about is a remarkable one and one that is fully explained in the Major Degrees of our Order.  However, without revealing the lesson imparted in that major event, we can entice those who have yet to take that final step toward full membership to do so by introducing them to this remarkable man who is recognized as one if the 12 Apostles of Ireland.

Born in 521 AD as Crimthann, prince of Clan Conail in Derry, he could have become Ireland’s High King had he chosen that path.  He was educated in both the pre-Christian bardic tradition and in the Christian religion at the abbey of Clonard on the river Boyne in what is now County Meath.  He chose instead to devote himself to Christ.  He was ordained to the priesthood at Clonard at the age of 25 and spent the next several years traveling through Ireland preaching and establishing monasteries, reportedly 41 in all – among them were Derry, Durrow and Kells.  He was something of a celebrity in his time and became known to the Irish by his monastic nickname Colum Cille (Dove of the Cell or Church), and is referred to by some historians by his Romanized name: Columba – not to be confused with Columbanus.

Colmcille’s preaching and monastery-making came to an abrupt end when he was about 42.  His love of scholarship and beauty and his prodigious skill as a scribe led him to make a poor judgement.  His teacher at Clonard was St. Finnian, who had just returned from a pilgrimage to Rome with a beautifully decorated copy of St. Jerome’s Book of Psalms translated into Latin by St. Jerome in the fourth century.  It was the only one in Ireland and Columcille, without Finnian’s permission, borrowed it and made a copy.  Finnian sued for the copy as stolen property and the High King of Ireland, Diarmait O’Carroll, ruled in Finnian’s favor.

Losing the first copyright case in history did not endear Columcille to Diarmait.  However, one of Columcille’s followers, fleeing Diarmait’s soldiers in an unrelated matter, sought sanctuary in one of Colmcille’s churches, but was forcibly removed and killed.  Colmcille, as Prince of Clan Conail, had enough and rallied his clan and waged war on the High King.  He took the field against Diarmait’s army at Cuildremne, County Sligo.  For Colmcille, the warrior, it was a great victory inflicting a humiliating defeat on Diarmait and 3,000 warriors lay dead on the field of battle.  Yet, for Colmcille, the Dove of the Church, it was a hollow victory.  Realizing what he had caused, Columcille mourned the loss of so many Irishman and wept for his part in their demise.  He also realized that because of the battle, he had become an embarrassment to himself, his faith and his country.  What could he do to atone for his transgression?  This Prince, Poet, Scholar, Scribe, Priest, Monk, and Warrior was about to add Missionary to his list of titles.  In order to redeem himself, he chose an extraordinary penance; he would exile himself from  his beloved Ireland and in his exile bring as many souls to the faith as had perished at Cuildremne.  In this manner Columcille became the first of Ireland’s white martyrs, as exiles for Christ were then termed.

He left Derry with 12 disciples in the year 563 AD, sailed northward toward the Hebrides off the coast of Alba (now Scotland) landing on the island of Iona, which was part of the Irish kingdom of Dal Riada. There he built an abbey on land given to him by his kinsman, the king of Dal Riada.  Using Iona as his base of operations, Colmcille began converting the Pictish inhabitants of Alba.  His missionary influence in his lifetime extended throughout the British Isles and as far north as Iceland and Iona, which became a dominant religious and political institution in the region for centuries, became the model for the many Irish abbeys founded outside Ireland.  Columcille, the most respected Irishman of his age, became the model for all the white martyrs who followed him bringing Christianity to the barbarian tribes that had overrun the rest of Europe.

Colmcille was highly regarded by both the Gaels of Dál Riata and the Picts, and is today the Patron Saint of Derry.  He is recognized, along with Patrick and Brigid, as one of Ireland’s three great patron saints and one of the Twelve Apostles of Ireland.  According to legend, he was also the first person in history to encounter the Loch Ness monster.

Did he ever return to his beloved Ireland?  Yes he did, but only once and you will have to take the Major Degrees of our Order to learn the incredible heart-wrenching story behind that event.