From the Desk of President McKay … 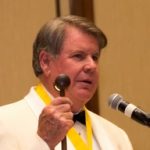 I’m just returning from D.C. where Senator Billy Lawless and I met with representatives from our National Homeland Security Agency concerning the many undocumented Irish born currently living in the United States. As many of you may know that figure could be anywhere from 35-50 thousand people. Many of these Irish born have been in residence for many years and have become hard working members of our community paying taxes and raising families just like you and I. With the attitude of our new administration toward this issue these undocumented could find themselves in very tenuous positions for themselves and their families. The meeting was very enlightening but not encouraging for this problem, a great deal of work has to continue to be done if a solution is ever to be reached.

We were also able to attend two evening receptions for our great friend Ambassador Anne Anderson, who has finished her term in DC as Irish Ambassador to the United States. The first was at her residence that included many notable people including the Chief Justice of the United States Supreme Court. The second was the next night on the Hill, at the Capital, which was sponsored by the Irish Caucus and the Irish Embassy. It was obvious that she was well liked and respected by our Congressional leaders from both sides  of the aisles.

During that day Senator Lawless and I were able to personally meet with numerous Congressman and Senators and their staffs concerning the long overdue Immigration reform act.  All agree that it’s an issue that has to be addressed sooner or later, but there doesn’t seem to be a consensus on the key word “reform” yet. Many members of our order have been working the Hill diligently on this issue for the past several years and it can be very frustrating at times at the political “football” this has become.

This week we celebrate the birthday of our Country and I know all have made plans to gather with their families and friends to toast a new year of our republic. Many of these gatherings have taken place for generations with their immediate and extended families. I hope many will start the day off w a prayer and reflection of the blood and sweat our ancestors paid for making this country what it is and the ” freedom” that we all possess and sometimes take for granted.