One of Ireland’s most enduring songs was first published in 1843 in the Young Irelander newspaper, The Nation, under the title Clan Connaill War Song. Its words tell of a prolonged struggle which started in 1594, and is recognized today as the last stand that Ireland made as a nation under her own laws. Led by Red Hugh O’Donnell, in alliance with the great Ulster Chieftains Hugh O’Neill, and Hugh Maguire, the struggle became the Nine Years War, and their opponent was none other that Queen Elizabeth I.

The O’Donnells were clan chieftains of Tyr Connaill (Donegal). Red Hugh, heir to the Chieftainship was captured by the British when just a boy of 16 and held in Dublin Castle as a hostage to insure Clan Connaill’s obedience. After 4-1/2 years in captivity, he dramatically escaped in January 1592 with Hugh and Art O’Neill – the only prisoners to ever escape Dublin Castle. They scrambled into the snow-covered Wicklow mountains where Leinster chieftain Fiach McHugh O’Byrne found O’Donnell near frozen to death holding the lifeless body of Art O’Naill. O’Byrne nursed the young prince back to health and sent him home. Red Hugh’s escape sent a thrill through all Ireland as messenger rode north, south, east, and west with the news that the heir of Tyr Connaill was safe.

Once back in Donegal, Red Hugh accepted the hereditary title of The O’Donnell and made an alliance with the two other great northern Chieftains, Hugh Maguire and Hugh O’Neill. For the next nine years, the three Hughs of Ulster decimated the queen’s army in Ireland. They were a national force of 1,000 horse-soldiers and 7,000 foot-soldiers at a time when the entire English force in Ireland was less than 2,000. In 1596, O’Neill swept through the north and each blow was echoed by O’Donnell and Maguire in the west.

In 1598, a reinforced English army of 4000 foot and 300 horse arrived to capture The Maguire’s fort at Enniskillen. The Irish met them on the Callan River at the Yellow Ford, and what happened next had never happened before in Ireland. On August 14, the English were outmaneuvered, outgunned and outfought. It was not the former un-disciplined martial style of traditional Irish foes; the recognition of Irish supremacy caused panic among the English troops. The Battle of Yellow Ford resulted in 3,000 English casualties and the loss of all arms and supplies. More than a victory, it was a national triumph. The Queen’s army had been destroyed; she was not on the brink of losing Ireland after Yellow Ford; she’d lost it and would spend a fortune to regain it.

In 1599, she sent Lord Essex with 16,000 troops. He foolishly lost much of his force chasing Fiach MacHugh O’Byrne into the Wicklow Mountains. After a comfortable summer in Dublin, he moved north in September, where he granted the Irish a truce and returned to Dublin. Elizabeth accused him of cowardice and Essex secretly returned to England to lead a rebellion against her. Essex ended up in the Tower, as Elizabeth poured men and money into the small remaining force she had in Ireland. Finally, she found the leader she’d been seeking. He was Lord Mountjoy, an efficient field commander whose campaign has never been forgotten: all things Irish – crops, homes, and cattle – were wantonly destroyed.

In September 1601, long-awaited Spanish aid arrived at Kinsale to help the Irish, but Mountjoy surrounded them. The Spanish Commander unwisely attacked, drawing the Irish into the battle prematurely to save him. The Irish force was outnumbered, and their substantial losses included Hugh Maguire. It was the most decisive battle in Irish history; the new Irish nation was dealt a mortal blow in its infancy. The Irish retreated to Ulster as O’Donnell went to Spain to negotiate more aid. Mountjoy dispatched an agent to Spain who poisoned the 28-year old Red Hugh O’Donnell on September 10, 1602.

Mountjoy continued his `scorched earth’ policy, which tore at O’Neill since his countrymen were paying the price for his rebellion. When he heard of Red Hugh’s death, he knew that all was lost. To end the nightmare, O’Neill surrendered. The old Gaelic system of law and government was broken. Then in 1607, London summoned O’Neill and O’Donnell’s successor to answer charges of planning another rebellion. Knowing that English planters were ready to seize their lands, O’Neill and O’Donnell knew their destruction was at hand. Their only course was escape.

The hearts of the Irish were broken as the noblest princes of Erin – Ruari O’Donnell and his brothers; Conor Maguire, brother of the slain Hugh; and Hugh O’Neill and his three sons – sailed from Lough Swilly in French ships on September 14, 1607. They were followed by almost 100 other Chieftains in what became known as The Flight of the Earls. The last Irish defense against English tyranny went with them.

Three of Ireland’s great tragedies: the Spanish landing in 1601 which precipitated the battle of Kinsale, the poisoning of Red Hugh O’Donnell in 1602, and the Flight of the Earls in 1607, all took place in the sadness of September. But the memory of Red Hugh, and what might have been, lived on. In fact, his memory remained so cherished by his countrymen that over 200 years later, when the Clan Connaill War Song was first published, it immediately became one of Ireland’s most popular songs. It remained a favorite through the years, and when the new Irish government was selecting a national anthem, it came a close second to the Soldiers Song. That it still holds a place in the hearts of the Irish around the world, is evidenced by the fact that it was adopted by America’s largest Irish organization, the Ancient Order of Hibernians, as their official song, and so it remains today under its more popular title of O’Donnell Abu. 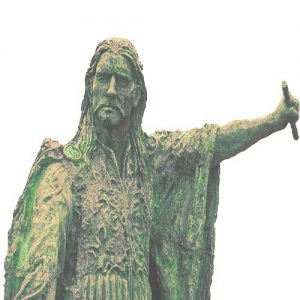