Seventy-five years ago, 35 orphans perished in a blaze in St. Joseph’s Orphanage in County Cavan. The orphanage was founded by the Poor Clares, a cloistered order of nuns, on Main Street in 1868. At the time, young delinquents could be educated and learn a trade in a reformatory, but orphaned and abandoned children were not accorded the same opportunity. The good sisters sought to address this by establishing an industrial school for girls. In the early morning of February 24, 1943, a small fire started in the laundry of the old building. Within 45 minutes it gutted the entire school, leaving only smoldering remains.

Cavan farmer Matt McKiernan lost his two sisters, Mary Elizabeth and Susan, that night. Their mother had died six months earlier and the parish priest sent the girls to St Joseph’s rather than see them raised by family friends because the family friends were Protestant. “They were two lovely girls and we never imagined when they went in there that they would never have come out again,” McKiernan said.

Locals in O’Sullivan’s pub were about to finish up for the night when one of them, Sissy Reilly, saw flames coming from the orphanage and sounded the alarm. One teacher, Miss Harrington, who was monitoring Our Lady’s dormitory in the middle of the building, rescued the children in her care after she was awakened by the smell of smoke. But it was the girls on the top floor, monitored by a teacher named Bridget O’Reilly, who perished. There was one fire exit on the top floor but O’Reilly bolted it and moved the children to a room where there was less smoke. She then went down the stairs and left the building herself as it filled with smoke.

The full truth of the fire never emerged at the time, however on November 6, 2006, RTE Radio One broadcast a documentary which concluded that all of the children could have been saved and that the girls were locked into their dormitories as the fire raged because the nuns didn’t want them seen in public in their night dress. The shocking claim included witness statements including one by a rescued child who claimed that the children were moved from room to room on the top floor and were ordered to say the Rosary as the fire spread from the laundry to the second and third floors of the building. The full truth never emerged until the documentary. A local man, Michael Holmes, said: “I have it from a reliable source that one of the reasons the children weren’t taken out was because the nuns didn’t want them to be seen in their nightgowns. It took a long time for locals to gain admittance to the building. But instead of being directed to the top floor where the children were, they were asked to go into the laundry to fight the fire.” He added, “What happened was a scandal. It took 45 minutes for the building to be burned to the ground. They say that there was a good chance of every single person surviving if they had been brought down the stairs and out the door in the first 15 minutes.”

The ill-equipped Cavan fire brigade arrived in a handcart with a punctured fire hose and ladders that didn’t reach the windows. A more professional Fire Brigade in Dundalk was summoned, but by the time they covered the forty-five miles of twisting road, it was too late. An equally professional Fire Brigade in Enniskillen, ten miles closer on direct roads, could have been called, but wasn’t because they were from Northern Ireland; even though they had crossed the border many times to assist in the South. Paddy Doyle, from the Cavan army barracks, helped with the clean-up and said “We were told to find bodies. There were all these children. We were just picking up bodies and bringing them out to quilts laid out on the square. You wouldn’t recognize anything.” Workers could only find enough remains to fill eight coffins so the bodies were buried together in a mass grave. One of the rescued children recalled: “There was this big sheet on the playground spread out. Someone kept saying not to look, but of course you look. I didn’t even realize it then that they were all bodies there; all in lumps. When I saw all the coffins – that is when it really hit me. They were all my friends that I used to play with. We used to joke and laugh and play together in the fields and they were all gone.“

Local Minister Sean McEntee established an enquiry with Judge Joseph McCarthy as chairman to investigate the fire. The nuns were allowed give evidence from their convent with lawyers representing them. In the documentary it was alleged that the nuns did not evacuate the children because they did not want them seen in public in their nightclothes and as a cloistered order they were not to leave the convent. When alerted to the smoke by an orphan girl, a senior nun made the decision not to evacuate, but to direct them to the top floor dormitory and close the doors. When help was finally admitted to the building, they were directed to the basement to put out the fire. Had the nuns allowed them to bring the children down in the first fifteen minutes they would have survived. When the fire brigade arrived, it was too late to help the screaming children trapped on the top floor. Forty minutes later the roof fell in and the building was turning into a smoking ruin. Thirty five children and one elderly lay woman burned to death. The nuns survived.

Judge McCarthy’s report (google: reportSt.Joseph’sorphanage.pdf), when published, found that the tragedy was due to faulty wiring in the laundry room flue, as well as the lack of an escape plan and an ill-prepared and a poorly equipped local fire-fighting service. Many called the report a whitewash; a view shared by the Secretary to the Inquiry Brian O’Nolan, (better known as author Flann O’Brien) and by a member of the Electricity Supply Board (ESB) Tom O’Higgins. They co-wrote the following sarcastic verse:

In Cavan there was a great fire,
Judge McCarthy was sent to inquire,
It would be a shame, if the nuns were to blame,
So it had to be caused by a wire.”

The convent is now gone and in 1985, Cavan College of Further Studies was founded there. The Cavan Institute still uses part of the building for their classes and outside the ‘New Beginnings Shop’ in the entry to the old St Clare’s building, called Convent Court, a plaque was erected in 2010 listing the names of the victims. The plaque was anonymously donated by the Friends of the Cavan Orphanage Victims. The caring people of Cavan also saw to a memorial at the mass grave of the victims in nearby Cullies Cemetery. 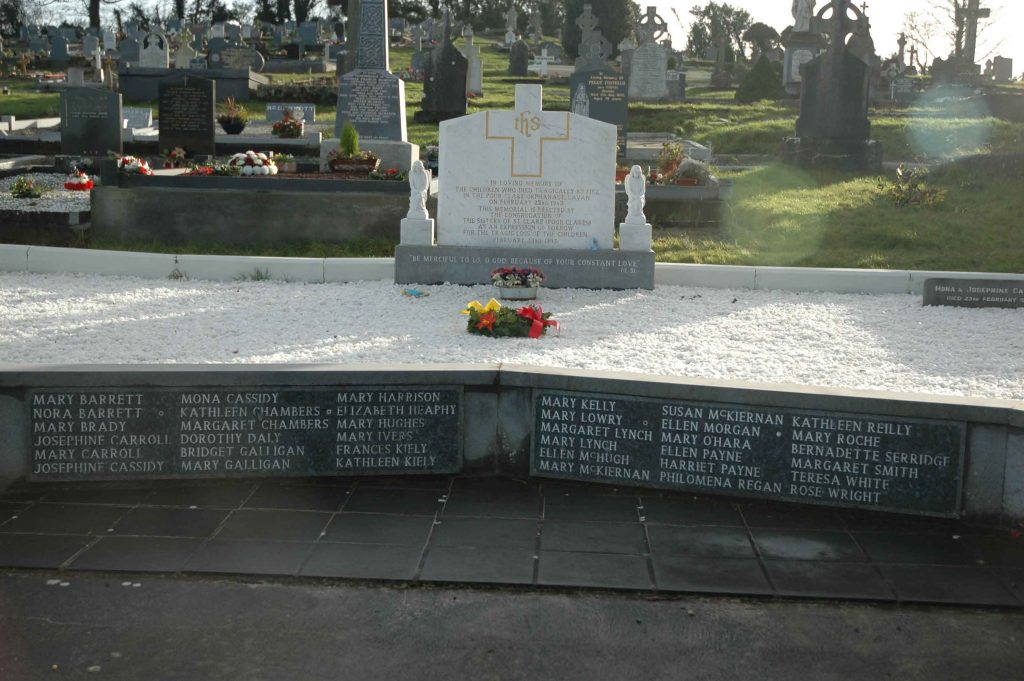