At the Suffolk County Board meeting on July 18, 2018, Martin Galvin, NY State Freedom for All Ireland (FFAI) Chairman, delivered certificates which read: “From Tyrone A.O.H. to Suffolk County, NY in appreciation of Thomas J. Clarke – Kathleen Daly Clarke Monument, Manorville, NY”. The certificates were signed by Tyrone County President Gerry McGeough and were entrusted to Martin Galvin on a recent FFAI trip.

Above Suffolk County Brothers in attendance at the county board meeting gather for a group photo in recognition of their receiving the certificates from the Tyrone AOH Board. The featured photo (below) shows Clarke Monument being Blessed by Fr. Mickey Bancroft in 2016. 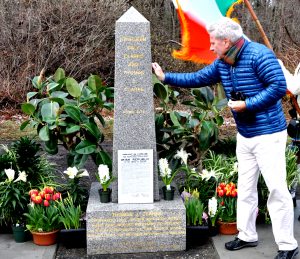 In May 1987, through the efforts of a special AOH committee chaired by Mike McCormack, the Clarke homesite was declared a historic landmark and an obelisk of Wicklow Granite (quarried and engraved in Ireland) was dedicated at the site as congratulatory letters were read from the Governor of New York and the Presidents of both the United States and the Republic of Ireland. And then in 1996, we added the name of Kathleen Daly Clarke to the monument, and rededicated it to their memory,
The Suffolk County AOH has been commemorating the Clarkes at their homesite every year on Low Sunday with a wreath laying at the Monument followed by a Communoin Breakfast.