One hundred years ago this month, the War to End All Wars concluded as an armistice was signed at 5 AM on November 11, 1918. Because of the six-hour time difference, in America it was the 11th hour on the 11th day of the 11th month – a remarkable coincidence! And again, the Irish were there.

Up until the United States entered World War One on 6 April 1917, there were some Irish-Americans pulling for Germany to overpower Britain; after all, the enemy of my enemy is my friend! However, loyalty to the land that adopted their families came first and foremost and when America entered the war on the side of Britain, Irish support for the American war effort was almost instantaneous. The Ladies Auxiliary of the AOH even put on a play entitled A Wild Irish Rose as a benefit for the American War effort. There were also many Hibernians who entered the America forces to fight the Kaiser – even if it did pull Britain’s fat out of the fire!

Many are the stories that came from that struggle like the gallantry of ‘Wild’ Bill Donovan and the New York 69th Regiment; Fighting Father Duffy and Joyce Kilmer to name a few. Yet there were still some naysayers who downplayed the Irish commitment to the America they had fought so hard to save less that 50 years earlier in the Irish Brigade and other Irish companies in the American Civil War!

Today, many artifacts of that struggle remain to verify the commitment of Irish-America to that war, but few as interesting as those revealed by physician, photographer and explorer Dr. Jeffrey Gusky. Dr. Gusky learned of hidden caverns under former WW1 battlefields in France, almost like underground cities, complete with communications, transport, medical facilities and even chapels. He investigated these ‘cities’ now lying silently beneath private farms in France and discovered artifacts, sculptures and emotionally charged “graffiti” that formed a connection with unnamed soldiers who occupied those areas a century ago. He even found unexploded ordinance.

Beneath the fields of Picardy are centuries-old abandoned quarries, some of which could shelter thousands of troops. One astonishing medieval quarry stretched for more than seven miles, connecting high ceiling areas reminiscent of subway stations. Billeted in in 1917 in just such a quarry at Chemin des Dames, was the 26th “Yankee” Division – one of the first U.S. units to reach the front. Visiting the quarry, Dr. Gusky found one carving that reflected an American baseball score etched between a Masonic anchor and chain and K of C 298 and he photographed it. But what was carved above that baseball score in larger letters than the rest is of greater interest to our readers for inscribed are the letters AOH! Dr. Gusky revealed that there are several such AOH inscriptions among the thousands he has photographed – there is even one carving of ‘Erin Go Bragh’. We may never know the identity of the Hibernians who left those inscriptions, but we believe that they wanted future generations to know that members of the Ancient Order of Hibernians were doing their part for America in the Great War. 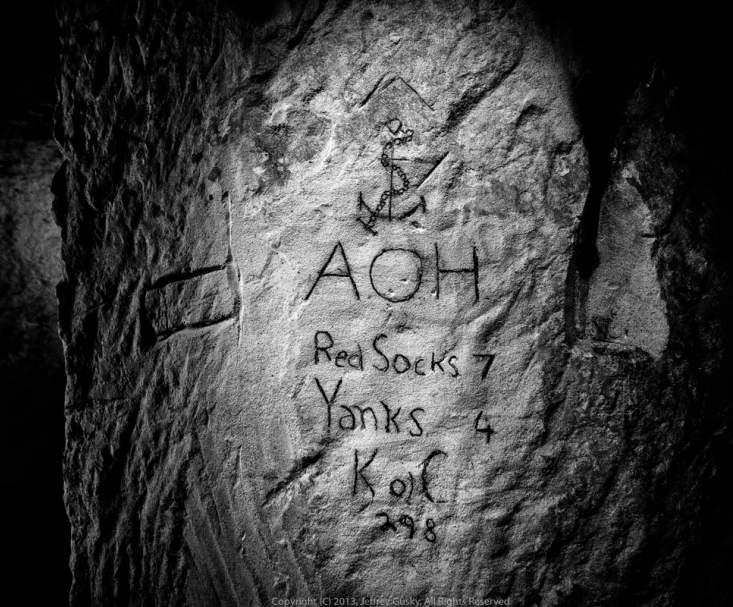 Dr, Gusky’s work is on display at the Smithsonian Air and Space Museum and a video of him explaining those remarkable dicoveries can be seen
at www.c-span.org/video/?439530-1/world-war-soldiers-art-trenches, We thank Dr. Gusky for sharing his story with us and wish him success on his many speaking engagements to share his findings.