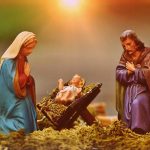 After spending many weeks in the liturgical cycle of Ordinary Time, in December we begin a new liturgical year with the first Sunday of Advent (December 2) and pass through the liturgical season of Advent into that of Christmas. Advent represents the time of preparation for the coming of the Savior. The liturgical color, representative of repentance and humility, is violet, except on the Third Sunday of Advent, traditionally known as Gaudete Sunday, when the color rose represents the joy of approaching the Christmas season. The Solemnity of the Immaculate Conception, December 8, ia a holy day of obligation. The Christmas season lasts from vigil Mass of Christmas to the Feast of the Baptism of the Lord (January 8). The liturgical color is white.

One of at least three saintly Finnians, this Irish saint may have been born at Myshall, Carlow, Ireland. He may have spent some years in Welsh monasteries. Later he founded several monasteries in Ireland, including Clonard, in Meath, which for many centuries was reknowned for Biblical scholarship. Though often referred to as a bishop, there is not solid evidence of his consecration.

Son of an Irish chieftain, he received a monastic education. On a pilgrimage to Rome, he was consecrated bishop by Pope John IV. Upon returning, he settled at Killaloe and is considered its first bishop.

Probably an Irishman, he was a disciple of St. Columban on the Continent, founded a monastery at St. Ursanne in present-day Switzerland, and evangelized the local people.

DAY OF PRAYER AND FASTING FOR THE CHURCH

Our national leadership has called upon all Hibernians to observe December 8, the Feast of the Immaculate Conception, as a day of prayer and fasting for the Church and those harmed by the misbehavior of some of our priests and bishops. Let us also remember on that day the great majority of our clergy who serve the Church faithfully and are in need of our encouragement and support in this trying time.

The annual March for Life will be held on January 18, 2019, on the Mall in Washington, D.C. If you have never attended, you are missing an amazing event. Watch the Hibernian Digest and news from your state leaders for information on AOH activities in Washington. Check with local diocesan and pro-life organizations for local observances as well.

–The newly-elected Democratic governor of Kansas, Laura Kelly, has announced that her administration will search for a way to avoid enforcing a state law protecting the religious freedom of adoption agencies which only place children in homes with a father and a mother.

–There were mixed results in several states this election cycle when it comes to pro-life measures. The state of Alabama passed a constitutional amendment proclaiming that Alabama is a pro-life state and that the unborn have a right to life. Alabamans also approved an amendment allowing for the display of the Ten Commandments on public property, a measure which some predict will not survive the inevitable ACLU suit in federal court. The voters in West Virginia approved an amendment to their state constitution specifying that there is no right to abortion in the state constitution. On the other hand, an amendment to prohibit public funding of abortion in the state of Oregon was defeated.

–Catholic Social Services of Philadelphia has gone to federal court for relief, after the city has ended foster care placements through the agency on account of its refusal to place children with homosexual couples. The Catholic agency has already lost a bid for temporary relief through the U.S. Supreme Court, but the case is currently being heard in the Third Circuit Court of Appeals. Concurrently, the city of Philadelphia is sounding the alarm over the shortage of available foster parents.

–On November 7, the Departments of Health and Human Services, Treasury, and Labor announced revised rules governing exemptions to the contraception mandate of the Affordable Care Act (Obamacare), to afford protection to religious individuals and entities, non-profits, small businesses, and individuals with non-religious moral convictions opposing abortion, contraception, and sterilization. Interim measures proposed last year by the Trump administration have been blocked at least in parts by various federal courts.

[Sources consulted for this report include: Butler’s Lives of the Saints, complete edition, ed. and rev. by Herbert Thurston and Donald Attwater; 4 vols. (New York, 1956); The Liturgy of the Hours According to the Roman Rite (New York, 1975); The National Catholic Register; ewtn.com; catholic.org; www.priestsforlife.org; catholicnewsagency.com.]

Merry Christmas to all.