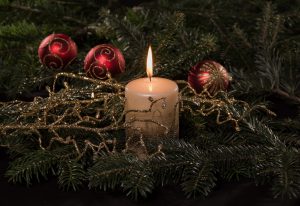 One of the most beloved Irish Christmas traditions is “The Candle in the Window.” The popular story behind this tradition is that a candle is placed in the window as a light to guide Mary and Joseph to Bethlehem and as a sign that they would be welcomed if they wish to break their journey at this home. It is a beautiful sentiment, and if it were for just this alone, it would be worth preserving. However, there is a sadder and darker history behind the tradition. It goes back to the time of the English Penal Laws in Ireland where Catholicism was proscribed and to be Irish a crime. In dark rural Ireland before the advent of electricity, a candle in a window could be seen for miles and was a sign that a Priest, at great personal risk to his liberty and safety, would be in the home offering a mass for those who were willing to risk the same.   The popular legend arose out of a beautiful “cover story,” that local authorities would dismiss as “popish superstition.”

Today Brothers we live in our own dark times. Our Church has been weakened by a small minority who betrayed the trust given them and the laws of God and man.   While we pray for the victims and support their quest for justice, we must never forget and support the many, many more servants of God who keep the faith, spread the Good News, tend the sick, and reach out to the marginalized. Let us as a gift this Christmas give them our support and be vigilant against those who would seize upon and generalize the reprehensible actions of a few not in a sincere quest for justice but as confirmation of their pre-existing prejudices.

We sadly also see efforts by some to deny and denigrate our Irish and Irish American cultural experience. Some would encourage us to take our Irish heritage “out of the window” of our day-to-day lives; bringing it out only once a year in March as an excuse for a bacchanal. The history of Irish Americans is an inconvenient truth that upsets some agendas, and some despicably deprecate and defame it rather than acknowledge it. We are the descendants of a small country who through most of its history knew poverty, hunger, and oppression. Ireland is a country whose chief export was its sons and daughters. Yet, those sons and daughters have changed the world out of all proportion to the size of our homeland. We should never feel reluctance in expressing our pride in where and from who we came from.

As we approach Christmas, let us be thankful for the gifts we have already received: our Faith, Heritage, and this Country. For the New Year let us resolve to resist the attempts of those who would seek us to hide or deny them. May they forever burn bright as a candle in our hearts.