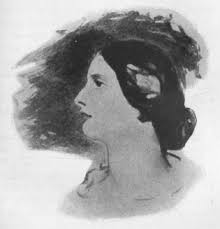 Jane Frances Agnes Elgee was born in Dublin at about 1821 and grew up in a deeply conservative family. She was a gifted linguist and published several translations of French and German works which were reprinted in America. Her first volume of poetry also contained translations from several European languages. In 1845, impressed by the size of the funeral of Young Irelander, Thomas Davis, she began to read his poetry in The Nation, an extremely nationalist newspaper published by Davis, Charles Gavan Duffy and John Blake Dillon, which awakened her to Irish nationalism. After Davis’s funeral, she began contributing poetry to The Nation under the pseudonym of Speranza (Italian for Hope). In 1847, at the height of the Great Hunger, they published her poem The Stricken Land.

Little children, tears are strange upon your infant faces,
God meant you but to smile within your mother’s soft embraces.
“Oh! we know not what is smiling, and we know not what is dying;
but we’re hungry, very hungry, and we cannot stop our crying.
And some of us grow cold and white — we know not what it means;
but as they lie beside us we tremble in our dreams.”
There’s a gaunt crowd on the highway — are you come to pray to man,
with hollow eyes that cannot weep, and for words your faces wan?
We are wretches, famished, scorned, human tools to build your pride,
But God will yet take vengeance for the souls for whom Christ died.
Now is your hour of pleasure – bask ye in the world’s caress;
But our whitening bones against ye will rise as witnesses,
From the cabins and the ditches, in their charred, uncoffin’d masses,
For the Angel of the Trumpet will know them as he passes.
A ghastly, spectral army, before the great God we’ll stand,
And arraign ye as our murderers, ye spoilers of our land

She later admitted, I was quite indifferent to the national movement, and if I thought about it at all, I probably had a very bad opinion of the leaders. For my family was Protestant and Conservative, and there was no social intercourse between them and the Catholics and Nationalists. But once I had caught the national spirit, the literature of Irish songs and sufferings had an enthralling interest for me. Then it was that I discovered that I could write poetry. In sending my verses to the editor of ‘The Nation’ I dared not have my name published, so I signed them ‘Speranza’. For some time the identity of Speranza was unknown to Gavan Duffy, the Editor, who judged from the fearless tone of the writings which aroused the enthusiasm of the Young Ireland leaders and their supporters throughout the country, that the writer was a man. He was surprised when he visited the home of his author and was confronted by a young lady whom he learned was his unknown correspondent.

She wrote pro-Irish independence and anti-British articles calling for armed revolution in Ireland. After the failure of the Young Ireland rising in July of 1848, the British arrested Duffy, and the editorship was taken over by Speranza and Margaret Callan until the British closed the publication. On 21 February 1849, one of her articles was used as evidence in a trial against Duffy who refused to name the author of the offending piece. He was threatened with prison when Jane stood up in the gallery of the Courthouse and loudly declared, I am Speranza! No charges were brought against her and Duffy was freed on appeal. After 1848, She did not lose sympathy with the National Cause, but was indignant with the lack of support it received. She wrote for The Nation after Duffy revived it on 1 September, 1849, but she cast aside the old nom de plume.

In 1851, She married surgeon Sir William Wilde in 1851 and had three children, Isola, Willie and Oscar, but her daughter Isola died of fever at age ten. After her marriage, Lady Wilde became a leader of fashion in Dublin. For years, she attended Viceregal functions in Dublin Castle as the wife of Sir William Wilde (knighted 1864). She was always a popular figure in Dublin and as she drove through the streets she was cheered by large crowds who remembered her sympathy with the national cause when she was known as ‘Speranza’ Author Martin McDermott wrote, No voice that was raised in the cause of the poor and oppressed, none that denounced political wrong-doing in Ireland was more eagerly listened to than that of the graceful and accomplished woman known in literature, as ‘Speranza’ and in society as Lady Wilde. In a review of her poems in the Fenian Irish People on the 25th February, 1835, it was stated: No Irish writer of our time, except, perhaps, Thomas Davis, has been praised so highly, nearly all the Young Ireland leaders offered incense at her shrine. Michael Doheny wrote an essay on her; John Mitchel quoted her poetry in his Last Conquest; Thomas Meagher quoted her in his speeches, and called his boat ‘Speranza.’

After the death of Sir William Wilde in 1876, she was in reduced circumstances, and moved to London trying to find a better market for her literary talents. In 1888, she published Ancient Legends, Mystic Charms, and Superstitions of Ireland. She was supported in her later years by her son Willie and the gifts of admirers. When her son Oscar Wilde sued the Marquess of Queensbury for publicly calling him a homosexual, Lady Jane Wilde advised him to stay and fight, rather than fleeing the country, as others had advised. He took her advice and lost his case, suffering imprisonment as a consequence. Lady Wilde contracted bronchitis in January 1896 and, dying, asked for permission to see Oscar, who was in prison. Her request was denied. Oscar later claimed that an apparition of his mother appeared in his cell as she died at her home in Chelsea on 3 February 1896. Willie Wilde, her older son, was penniless, so Oscar paid for her funeral, which was held on 5 February. A headstone proved too expensive and she was buried in common ground. However, a monument to her, in the form of a Celtic cross, was erected at Kensal Green Cemetery by the Oscar Wilde Society in 1999. She was a remarkable woman!