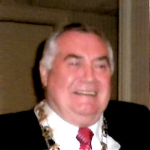 In the early months of 2003, the National Ancient Order of Hibernians under the guidance of then President Ned McGinley, and in conjunction of the LAOH made the following announcement –

The Charities Ancient Order of Hibernians as well as the Ladies AOH Charities, some which are long standing and several of which will be new this year, help to define our purpose and goals of our Fraternal Order for the foreseeable future. Each body of our Order can participate, to any degree they wish, in those charitable quests which fulfill the motto of our Brotherhood: Friendship, Unity and Christian Charity. Our new National 501c(3), which we are actively seeking, could also be in place to enhance the fundraising efforts. This is an opportunity to define us to our local communities and at the same time have an impact on the national and even the international Diaspora of the Irish people.

A new effort in which, because of the tortured history of out ancient land, the Irish Diaspora has a singular vested interest would be the national Hibernian Hunger Project. This effort is a defining moment in the message that the AOH/LAOH brings to this land in which our ancestors sought sanctuary. A recent reading of Paddy’s Lament, by Thomas Gallagher defines what an unthinkable horror the great Hunger An Gorta Mor, was to those Irish people who came to the United States before us. Those people who gave us a legacy of generosity for those on greater need than ourselves.

The people of Ireland right up until this very day recognize their vested interest in “Hunger”. And embrace the world as they battle far away famines in Africa, Pacific Islands, and in other places far beyond their Atlantic shores. This is an opportunity for the group that Tim Pat Coogan called “that quintessential Irish-American Organization”. our own AOH/LAOH to take its rightful place in the hierarchy of Irish- American organizations. Dispelling the image of the St. Patrick’s Day Irishman with positive efforts to make March, Irish Heritage Month, a month of service for our Patron St. Patrick.

First Annual AOH Hunger Project will take place in March 2003. We would request local participation by every Division, County and State Board. This project is an opportunity for the AOH to:

a. Fight hunger at a time when food banks and kitchens around the United States are at a low ebb as winter ends.

b. Display the Irish Diaspora’s vested interest in hunger and educate citizens in the United States about An Gorta Mor (Great Hunger) in Ireland.

c. Demonstrate the natural generosity of the Irish to share with others.

d. Combat by positive act negative displays of the “green beer”, “plastic hat” pseudo Irish on St. Patrick’s Day
Please join the total effort with a project in your area, county, and state.