And the Tradition Continues…! 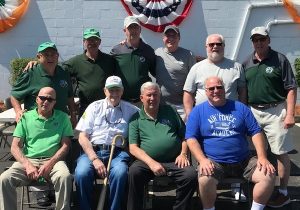 For over five decades members of the Tomas Cardinal O’Fiaich Division 14 AOH in Watertown, Massachusetts have been marching in Watertown’s Annual Memorial Day Parade to honor those who have gone before them. Over the years Division 14 members have been joined in the line of march by their brother and sister Hibernians from across Massachusetts and Southern New Hampshire. Division 1 of Holyoke, which is in the western part of Massachusetts, every year enters a float in this parade and the New Hampshire Pipe and Drums, some of whose members are from Division 14, keep the marchers in the Hibernian contingent in line and in step along the parade route.

Approximately 90 minutes prior to the start of the parade, Hibernians gather at the Cottage Street Cemetery in Watertown to place a wreath near the graves of many Irish immigrants who are buried in this old cemetery. Many of those buried there came to America during the time of the Great Hunger in Ireland in the late 1840’s. Also buried in this cemetery are the graves of some who fought in the American Civil War during the early 1860’’s. After a brief prayer service and the placing of the Memorial Wreath, members head over to the beginning of the parade route, line up and walk the two-mile route through streets of Watertown being cheered on by the parade spectators. What a great display of Irish and Hibernian pride!

At the end of the parade, Hibernian marchers and members of Division 14 are invited back to the Watertown Hibernian Hall for a free barbecue and an afternoon of entertainment by the New Hampshire Pipe and Drums.

This Memorial Day event has turned out to be one of the biggest events of the year for Division 14, and definitely shows the true spirit of Friendship, Unity and Christian Charity at its best!