The Dennis E. Collins Division 1 AOH of Newport Rhode Island hosted the 2019 Rhode Island State Convention on Saturday, September 21 at their Division Home. AOH RI State President Wick Rudd opened the State Convention and welcomed the delegates who were in attendance. In his report President Rudd spoke on what had been accomplished over the past two years and the boards efforts to support all the Divisions in their state. He thanked his officers for their time, talent and efforts while he served as President. Following the President’s remarks, each of the officers gave their report along with the states three Directors.

AOH National Director Bill Sullivan brought greetings from the AOH National Board and spoke on the National Boards efforts to increase membership, communication, the Major Degree and the National Board’s Web Blast. Sullivan also fielded a number of questions from the delegates on a variety of topics. RI State Historian Dean Robinson during his report gave a detailed history of the early AOH and its’ beginnings in the US.

President Burns in his remarks noted that that he hoped to build upon the accomplishments of the past four years of Wick Rudd Presidency and looked forward to working with the newly installed officers. He also noted that he would shortly be sending out information to all Divisions and State Officers of future meetings and events. A reception and luncheon for the delegates hosted by Division1followed the convention. 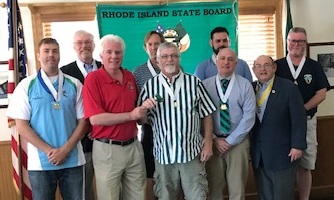