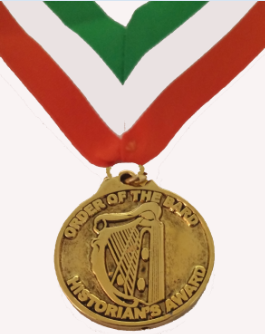 National History Day (NHD) is an annual program for elementary and secondary school students across the United States and participating international affiliates. Hundreds of thousands of entries in the form of exhibits, websites, essays, slide presentations, video documentaries and performances are created each year by individuals or groups in grades six through twelve. The AOH and LAOH are proud sponsors of NHD and annually present a First and Second Place award to the best entries on a topic related to Irish or Irish American history that fits the annual theme set by NHD each year. The First Prize, awarded by the AOH, consists of a Certificate, a Gold ‘Order of the Bard’ medallion and two round-trip tickets to Ireland valued at $2,000. The LAOH Award consists of a certificate, a Silver ‘Order of the Bard’ medallion and a $1,500. Scholarship Assist.

Each year, more than half a million students participate in the NHD competition beginning at the local school level; they move to a regional competition, then a State competition and ultimately to the National Finals at the University of Maryland in College Park, MD. The National finals will be held June 14-18, 2020. Adjudicators are teaching professionals and historians and, in addition to the Irish Awards sponsored by the AOH/LAOH, there are awards sponsored by many other organizations and it is possible to win more than one. Those wishing to participate can find rules, regulations and contacts on the NHD Website: https://www.nhd.org. This year’s theme is Breaking Barriers in History and the following topics are suggested as entries for the Irish Awards:

Daniel O’Connell – How did he begin to break the barriers established by the Penal Laws?

Wolfe Tone – how did he break the barriers against segregation and unite Catholics and Protestants in a unity that became the nationalist theme of all future revolutions?

Charles Stewart Parnell – How did he and the Land League break the barriers of landlordism and begin the process of returning property to the native Irish?

The Irish Brigade – How did the bravery of the Irish in Union blue during the American Civil War break the barriers of bigotry against the Irish in America?

Douglas Hyde – What barriers did he break to save the Irish language from extinction?

Women’s Suffrage – How did the women’s service in the various units of early 19th century Ireland, such as Inghinidhe na hEireann, Cumann na mBan, Sinn Fein and the Gaelic League help to break down barriers in their efforts toward equality?

John F, Kennedy – What barriers did he break in his run to become the first Irish Catholic President of the United States?

Civil Rights – What were the barriers that the Irish Civil Rights movement of the 1960’s sought to break and to what extent did they succeed?