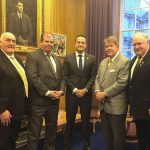 On Wednesday, February 13, 2019, AOH National Board President Judge James McKay, National Treasurer Sean Pender and National Director Dan Dennehy had an unforgettable meeting with Taoiseach Leo Varadkar at the Oireachtas Éireann. The Oireachtas is the legislative body of the Republic of Ireland. It consists of the Office of the President of Ireland and its two houses: the Dáil Éireann (lower house) and Seanad Éireann (upper house). The houses of the Oireachtas sit in Leinster House in Dublin. The opportunity to meet with the Taoiseach was arranged by Senator Billy Lawless, … END_OF_DOCUMENT_TOKEN_TO_BE_REPLACED 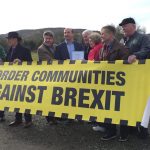 A delegation of forty AOH and LAOH members met with the group known as Border Communities Against Brexit in Newry, the city referred to as the "Gateway to the North" on the border of County Armagh and County Down. The encounter followed a discussion at Dromintee Gaelic Athletic Club, as part of the first stop on the delegation's Freedom For All Ireland Tour of Ireland. A panel including National President, Judge James McKay, National Freedom for All Ireland (FFAI) Martin Galvin, and Border Cross-Community leaders Damien McGenity, Declan Fearon, and John Sheridan discussed the impact … END_OF_DOCUMENT_TOKEN_TO_BE_REPLACED