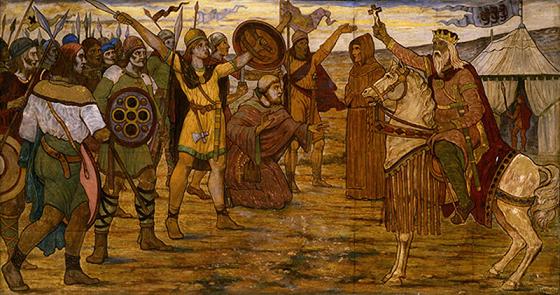 A centenary is a 100-year anniversary and next year we will commemorate the Centenary of the Easter Rising.  However, last year Ireland commemorated a millenium, or a thousand year anniversary, of the battle of Clontarf in which the power of the Vikings in Ireland was forever broken – the only country to ever do so.  Wherever Vikings settled, they took control, but when they tried to control Ireland they failed.  For two centuries they attacked towns and monasteries, making quick raids and plundering wherever and whenever they could.  Their failure came at the hands of Brian mac Kennedy in 1014.

Born near present day Killaloe, Co Clare on the west side of the River Shannon, he was the youngest son of Kennedy, Chief of the Dal Cassian.  His eldest brother Mahon was to succeed as Chieftain so Brian was sent to Clonmacnoise to become a monk.  At the monastery he learned to read, write and appreciate his heritage.  He studied military leaders & tactics and learned to despise the Viking raiders who were plundering Irish monasteries.  In 951, word came that Brian’s parents had been killed by Vikings and he left the monastery to seek revenge.  Mahon, who was now Clan Chieftain, announced he was making a treaty with the Vikings of Limerick, but Brian objected!  He and a group of followers left the clan and began raiding Viking camps.  Though few in numbers, his men defeated larger forces and his fame spread throughout Munster attracting many more to his banner.  As Viking raids continued, Mahon realized that Brian had been right.  He renounced his truce with the Vikings and the two brothers joined forces.  They took Cashel from another Celtic Chieftain who had made an alliance with the Vikings to stay in power.  Mahon then realized that Limerick was too close to Cashel and his stronghold in Co. Clare so; Viking power in Limerick had to be eliminated.

In 968, the two brothers defeated the Vikings in Limerick and ruled peacefully for eight years over Clare, Cork, Kerry, Tipperary and Limerick.  However, the Vikings returned in 976, and Mahon attended what was to have been a peace conference with a Chieftain named MacBrain and his Viking allies.  At the meeting, Mahon was killed.  Brian was now the undisputed Chieftain and he attacked and defeated the forces that had slain his brother.  After fortifying his power in the south, Brian built a fleet of ships to patrol the Shannon and defeated the Vikings in Waterford.  Brian then set his sights on the Vikings of Dublin who had allied with the King of Leinster and were raiding the center of Ireland.  With the support of Malachy, the King of Meath at Tara, who controlled the northern part of Ireland, they beat the Vikings of Dublin in 1000.  Brian allowed the Vikings to stay, but an annual tribute was imposed.  It’s for that reason that Brian MacKennedy became known as Brian Boru or Brian of the Tributes.  Brian now led his army to Tara, where his ally, Malachy, ruled.  Brian’s reputation was so wide-spread that Malachy submitted with little resistance and Brian Boru was now High King of all Ireland.

Brian’s reign as High King lasted 12 years and the country prospered.  Monasteries and schools destroyed by Vikings were rebuilt as were roads, bridges and churches. Illuminated manuscripts and delicate metal work that had been hallmarks of monastic art saw a rebirth.  Trade increased and emissaries were even sent to Scotland and Wales to solicit tribute in return for the protection of the King of Ireland.   Brian built his palace, Kincora, on a hill overlooking a shallow part of the Shannon where tribute cattle could be driven across.  Today it is the town of Killaloe and a Catholic Church stands on that hilltop.  In its day, Kincora was the most noble of all the halls in Ireland.  Throughout his reign, Brian fought challenges from minor Chieftains who refused to submit to his authority, but by 1011, all regional rulers had acknowledged him as High King.

Then, in 1012, Maelmora, King of Leinster, rebelled.  Knowing he would need help to defeat Brian, he invited the return of the Vikings, who were eager for revenge.  Sigtrygg Silkbeard, a Dublin Viking leader, called on Vikings from Orkney to the Isle of Man as well as rebellious Vikings from Limerick, Waterford, Wexford and other towns Brian had subdued.  To Dublin they came and were joined by a few Irish chieftains who saw this as a chance to quit their obligation to Brian and avoid their annual tributes.  Brian saw this as a threat to his plans for a better Irish nation.  He regretted letting the Vikings stay in Ireland as long as they promised to be loyal.  He would now have to settle this for good.  Brian called the clans for support and even received troops from ‘Wolfe the Quarrelsome’ and other Vikings whom he had left to rule their own territories.  It was to be Irish and their Viking allies against Vikings and their Irish allies.  Brian set out for Dublin and the final battle.  In the early dawn of Good Friday, March 25, 1014, the army of High King Brian Boru assembled on the field of Clontarf, just north of Dublin.  Brian, at 73-years old, was too old to lead so the army was commanded by his son Murchad.  Brian was safe behind the lines with his personal guard.  The battle was a bloody clash lasting all day.  By evening the Vikings were pushed back into the sea and the rest of the rebels fled back to Dublin.  The Irish chased them and those who had been guarding Brian joined in the chase.  Brian, meanwhile, knelt in prayer in his tent giving thanks for the great victory and envisioning a new Ireland.  A Viking warrior named Brodar, who had fled the battle, came across Brian in his tent.  He saw that there were few men guarding the King and he hacked his way through Brian’s attendants and came up behind the King of Ireland, kneeling in prayer.  It is recorded that Brian, startled by the noise behind him, turned and drew his sword, prepared to defend himself.  He slashed Brodar’s leg, but it was too late.  Brodar’s sword was already descending and cut off Brian’s head.   The High King of Ireland was dead, but Brodar did not escape to brag of his treachery.  Brian’s furious men seized the wounded Brodar and dispensed proper justice to the man who had  killed  the greatest leader that the Irish had ever known.  They left him tied to a nearby tree – with his own intestines!

Brian’s body was taken to Armagh, the ecclesiastic center of Ireland, and was entombed in the wall of St. Patrick’s cathedral.  His army had been victorious and Ireland had become the only country to break Viking power.  After 1014, there was never another Viking raid in Ireland.  After Brian’s death, Malachy returned as High King and Dalcassian strength was reduced to Munster only.  Viking presence remained in Ireland; their power crushed, but as Brian had decreed – only as merchants and traders.  Eventually they adopted Irish manners and customs and were absorbed into the mainstream of Irish life.  Although the position of High King was filled from time to time after Brian’s death, Ireland would never again have a ruler who controlled the entire country as Brian had.  Brian Boru was in fact, the last true High King of the Irish.  Centuries later, when Thomas Davis wrote his inspiring ballad A Nation Once Again, the reign of Brian Boru was his reference.

In 977 A.D., when Brian defeated the Vikings of Limerick, he made them a tribute tribe.  Led by ‘Wolf the Quarrelsome’, they soon became close allies to Brian with Wolf himself sometimes referred to as Brian’s “brother-in-arms”.  Wolf  survived the Battle of Clontarf, but lost his “brother-in-arms” when Brian was killed.  He watched Ireland return to factional fighting and knew there would never be another High King like Brian Bóru. He left Ireland and travel to the Viking colony in Iceland.  As he sat around the fires on cold Icelandic nights he retold the story of the Battle of Clontarf, and of the man he knew as a friend for 37 years. His memoirs were written down and became part of the Icelandic Sagas.  They are considered more factually accurate than any other accounts for he had attended every council meeting with Brian and was better informed than any other author.