Dubh (Doov) in the Irish language means dark or black and is used to describe someone by the color of their hair as in Roisin Dubh (Dark Rosaleen) or Hugh Dubh O’Neill (Black Hugh O’Neill), an Irish patriot of the 17th century best remembered for his defense of Clonmel in 1650. He was also nephew of Owen Ruadh O’Neill (Owen the Red O’Neill) whose red hair was a distinguishing characteristic.

Some believe that survivors of the Spanish Armada who landed in Ireland were the ancestors of Ireland’s black-haired population, but that’s not true; black hair and brown eyes were attributes of the original Celts. Further, there was no great settlement of Spanish military in Ireland. In November, 2017, Ireland’s archives published an article entitled: ‘Spanish Armada Shipwrecks along the Wild Atlantic Way.’ It revealed facts about the estimated 6,000 men lost on Ireland’s coast in September, 1588, in what was one of the worst Atlantic storms ever recorded. The article, from archaeological sources, details a horrible end to nearly 1,100 Armada survivors who wrecked in Sligo’s Streedagh Bay, according to the testimony of a surviving Armada officer.

Captain Francisco de Cuellar later wrote that, as a survivor, he found: “the land and shore were full of enemies, who went dancing with delight at our misfortune; and when any one of our people reached the beach, two hundred savages and other enemies fell upon him and stripped him of what he had.” These were the English garrison troops and Irish loyal to the Crown who stripped survivors of their possessions before turning them over to the British for a reward. However, there were Irish clans protecting survivors and, according to Cuellar, they were: “ the O’Rourke of Breifne, McClancy of Rosclogher and Redmond O’Gallagher of Derry.” They did so at the behest of the three Hughs – O’Neill, O’Donnell and Maguire – who safely returned survivors to Spain hoping to secure Spain’s aid in the coming Nine Year’s War. Estimates run as high as 300 who reached the Sligo shore from 3 ships and, like the other survivors, they were stripped and executed; officers, like Cuellar, were ransomed back to Spain. Virtually none survived to settle down and marry Irish women; those few who escaped detection were more anxious to get out of enemy territory and back to their own families than to settle down among the Brits.

To date, only the wreck of La Juliana has been researched; it lay 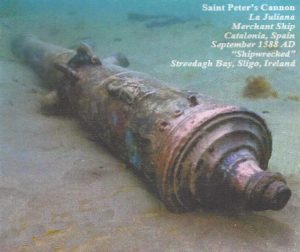 with 23 other Armada shipwrecks off the Irish coast from Antrim to Kerry. Protected National Monument Sites, no public diving upon the ships is allowed. La Juliana was examined by archaeologists and for the first time in 430 years, human eyes saw the superior forging and the armorial crests of the families that made the bronze Armada cannons. Some, signifying the 16th century Genoa gun foundry of Dorino Il Gioardi, were embossed with figures and names of saints. One was emblazoned with motifs of flames and celestial images of suns and stars, capped by two ornate lifting handles shaped like dolphins – a testament to the craftsmanship of the 16th century Sicilian gunsmith Federico Musarra. Another bears the figure of St. Peter holding the keys of Heaven standing atop a scroll indicating the cannon’s weight and the year 1570 AD. One, forged by ‘Master Mustafa’ of Turkey with Islamic inscriptions on it was obviously a war prize since La Juliana took part in the 1571 Battle of Lepanto, defeating the fleet of the Ottoman Turks. This was the Renaissance period and ornate designs were the norm, not the exception. This is the largest retrieval of bronze cannons so far and more will come. Today, these cannons are in Sligo, but there are 23 more yet to be researched. This will take years and hopefully will result in Ireland’s first National Maritime Museum.

So the next time your hear that the Black Irish are descendants of the Spanish Armada, you know the truth. It’s the blonde, blue-eyed Irish who are descended from foreigners – like the violent Vikings and the peaceful Normans (also descended from Vikings) and who eventuallly settled in Ireland to become as Irish as the Irish themselves – but never more Irish!