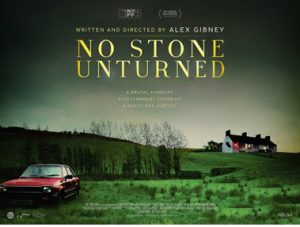 The arrest of award-winning veteran journalists Trevor Birney and Barry McCaffrey for their work connected to the 2017 documentary “No Stone Unturned” is an attack on one of the accepted pillars of a free society: free speech expressed through an independent press.  It is also a blatant assault on the US-brokered Good Friday Agreement and its commitment to bring a lasting peace by addressing with justice the legacy of the troubles.

Birney and McCaffrey were arrested for their investigative journalism of the 18 June 1994 attack on the Heights Bar in the remote village of Loughinisland, County Down.   On that day gunmen burst into the pub and sprayed it with submachine gun fire.  Eleven men who had been peacefully watching a soccer game were shot in the back. Six died including an 87-year-old.  It was a “massacre” in the full breadth and horror of the word.

Despite the Northern Ireland police recovering articles of clothing worn during the attack, the getaway car and the weapon used (which was traced to a shipment of weapons brought in by a British run intelligence asset) and even a confession from the wife of one of the assailants, 24 years on the case remains “unsolved”. In “No Stone Unturned”, Birney and McCaffrey” revealed glaring failures of basic police procedure in the investigation of the massacre and the destruction of key evidence while in possession of the Northern Ireland police. We cannot help but observe that Birney and McCaffrey made more productive use of the disputed files than British law enforcement had in over two decades.

It was this story which Birney and McCaffrey in conjunction with Oscar-winning director Alex Gibney were trying to take to the broader world, and specifically to the US, in the hopes that by shining a spotlight on this tragedy the truth may finally be rescued from the dark abyss of bureaucratic obstruction and collusion.  We believe it was no coincidence that the arrests were made at the start of the US Labor Day holiday weekend in an attempt to minimize American awareness of this scandalous abuse of police powers to quash the press.

Per the AOH Freedom for All Ireland Chair Martin Galvin, “Today’s chilling arrests of filmmakers Birney and McCaffrey seem to add new meaning to the film title “No Stone Unturned.” It seems it is “No Stone Unturned” when it comes to retaliating against journalists who embarrass the constabulary by uncovering truths which the constabulary wishes kept hidden. The AOH fully understands the importance of these arrests and will be working for their exoneration with their legal representative Niall Murphy.”

The Ancient Order of Hibernians call upon members of the House Foreign Relations Committee to question Secretary of State Pompeo as to why the reluctance on the part of the Secretary of State to appoint a Special Envoy in fulfillment of the Presidents commitment and the bipartisan will of Congress.  The arrests of Birney and McCaffrey make a prima facie case as to why a US Special Envoy to Northern Ireland continues to be needed to advance the full implementation of the Good Friday Agreement and safeguard the US legacy in the cause of peace.  Neither the appointment of a US Special Envoy to Northern Ireland nor justice for the victims of the Loughinisland massacre can be further delayed if a lasting peace in Northern Ireland is to be secured.