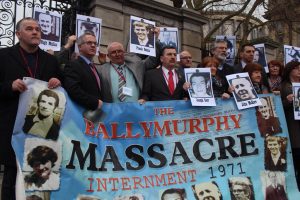 Calling the upcoming Ballymurphy Massacre Inquest “a fundamental test of Britain’s ability to give legacy justice”, Danny O’Connell, National Vice-President of the Ancient Order of Hibernians,announced that he and National Secretary Jere Cole will be meeting with the Ballymurphy Massacre families in Belfast to pledge the support of the powerful Irish American organization to these families in their battle for truth.

“The AOH as a leading voice of the Irish in America, recognizes  the upcoming Ballymurphy Massacre Inquest will be a fundamental test of Britain’s ability to give legacy justice.

“Since August 1971 the Ballymurphy  families have maintained that 11 innocent people including a priest and mother of 8 children were murdered. They have fought for their legal right to testify in an Inquest about what they witnessed, and to cross-examine any witness who claims justification for these killings. They have met with repeated delays.

” Accompanied by National Secretary Jere Cole, I will be meeting the Ballymurphy families, to pledge American support in their fight for

These families are entitled to truth about the killings of their loved ones. The AOH pledges to help them in their long battle to get that truth and justice

justice and truth. We are disappointed with the latest delay.

“We will receive a full briefing and see the locations of the killings with family members. We will report back to our membership across the United States, and to our elected representatives. The AOH will follow this briefing by  monitoring the Inquest, and providing updates on the testimony to our members.

” Our Freedom for all Ireland Chairman has invited Carmel Quinn, a sister of one of theBallymurphy Massacre victims to come to America and bring Ballymurphy’s story directly to our members  in a multi-state speaking tour in November.

“These families are entitled to truth about the killings of their loved ones. The AOH pledges to help them in their long battle to get that truth and justice”

“In her Forward to the Consultation Paper, British colonial secretary Karen Bradley wrote legacy mechanisms ‘must seek to meet the needs of victims’ and ‘must be fully consistent with the rule of law’. She pledged to ‘reject any attempts to rewrite the history of the past’ or ‘displace responsibility from the people who perpetrated acts of terrorism.’

“The Ballymurphy Massacre families want truth. They believe British troopers ‘protected’ Ballymurphy by murdering 11 residents, including a Catholic priest and mother of eight. Theysay an Inquest will prove that Britain displaced responsibility by blaming the victims.

“If the evidence proves that the 11 killings were murders, how can Britain reject rewriting history with truth or escape shifting blame from exonerated innocent victims back onto British troops for murder and smearing the dead?“