The Ancient Order of Hibernians, has issued the following statement by National Freedom for All Ireland Chairman Martin Galvin. Congressman Brendan Boyle, Irish Consul General Ciaran Madden, and representatives of Irish and British political parties, joined with Irish Americans across the country, to hear victims’ relatives and survivors appeal for help to stop Britain from taking away their rights to legacy justice. Jacqueline Butler, daughter of a Springhill Massacre victim, Steven Travers a survivor of the Miami Showband Massacre, and Martin Mallon, whose aunt Roseann Mallon was one of … END_OF_DOCUMENT_TOKEN_TO_BE_REPLACED

AOH National President Danny O'Connell and Secretary Jere Cole in Ballymurphy The Ancient Order of Hibernians, has issued the following statement by National Freedom for All Ireland Chairman Martin Galvin: “The Ancient Order of Hibernians, America’s oldest and largest Irish American organization, welcomes the announcement by Justice Keegan that she will publish her findings of the Ballymurphy Massacre Inquests on May 11th 2021. “The Ballymurphy Massacre is a fundamental test of Britain's ability to give legacy justice. If victims cannot get justice where 11 people, including a … END_OF_DOCUMENT_TOKEN_TO_BE_REPLACED

Hundreds of victims' families, fighting new British plans to cut off chances for legacy justice, will make a special live appeal for American support on a webinar hosted by Hibernians on Saturday, January 23rd. This special appeal to Irish Americans will climax a series of events, including a published open letter signed by hundreds of families, and political initiatives both north and south. Relatives for Justice Director Mark Thompson and selected victims' representatives will speak from Ireland, while America's oldest and largest Irish organization, the Ancient Order of Hibernians and … END_OF_DOCUMENT_TOKEN_TO_BE_REPLACED

Once again, the British Government has refused to honor its own court rulings, pledges, and international law, regarding the murder of civil rights lawyer Pat Finucane. It has again refused a public inquiry which would reveal the extent of British state complicity in the murder and has instead told the Finucane family to again make complaints to the constabulary or ombudsman, in other words, to continue with the very process that the British Courts have found as insufficient. We can only conclude that Britain has much to hide. AOH National President, Daniel J O’Connell, added “the British … END_OF_DOCUMENT_TOKEN_TO_BE_REPLACED

A Report on the use of Plastic and Rubber Bullets in Ireland The Ancient Order of Hibernians was honored to host a virtual release of the “Plastic Justice Report” prepared by Relatives for Justice, Belfast. The report was broadcast on YouTube on Saturday, October 24 at 4 pm Local time in Ireland, 11 am Eastern U.S. https://youtu.be/QahLrUFCbuA Per FFAI Chairman Martin Galvin: “Plastic Justice“ is a special report on how British state forces used plastic bullets to kill 17 innocent Irish people with impunity, will get a transatlantic launch on Saturday, October 24. In Belfast, … END_OF_DOCUMENT_TOKEN_TO_BE_REPLACED

Hibernians Host Live Virtual Release of "Plastic Justice Report" The Ancient Order of Hibernians, National Freedom for All Ireland (FFAI) Chairman Martin Galvin has announced that the Hibernians will be hosting a virtual release of the "Plastic Justice Report" prepared by Relatives for Justice, Belfast. The report will be broadcast on YouTube on Saturday, October 24 at 4 pm Local time in Ireland, 11 am Eastern U.S. Per FFAI Chairman Galvin: "Plastic Justice" is a special report on how British state forces used plastic bullets to kill 17 innocent Irish people with … END_OF_DOCUMENT_TOKEN_TO_BE_REPLACED

AOH/LAOH present Freedom For All Ireland (FFAI) Grants by Zoom. Freedom for all Ireland (FFAI) grants totaling almost $100,000 were handed out last month to seventeen applicants by the American Ancient Order of Hibernians (AOH) and Ladies Ancient Order of Hibernians (LAOH.) Leading figures from each grant recipient, then joined in a zoom webinar conference on September 19th, telling Hibernians from across the United States, about each group's work and how much they count on American financial help. The grant checks were personally delivered in Belfast, Derry, Tyrone and Down by recently … END_OF_DOCUMENT_TOKEN_TO_BE_REPLACED

A chairde: FFAI ISSUES UPDATE A -- Catholic Bishops, legal scholars and justice campaigners slam British plan on legacy killings -- Four Catholic Bishops, legal experts and justice campaigners slammed British plans on crown legacy killings, accusing Britain of "bad faith" and "rewriting the rules of justice." Instead of an Historical Investigations Unit investigating hundreds of controversial killings, including British trooper killings, Britain wants only a review by their appointed "independent body". This panel would close all cases, unless they saw "new compelling evidence and a … END_OF_DOCUMENT_TOKEN_TO_BE_REPLACED

https://youtu.be/jZVUJxilKdk In this video, (the first in a series being arranged by the National Board) Mark Thompson of Relatives for Justice, explains in a few minutes just how much our AOH and LAOH FFAI work means to those in Belfast and across the north working for justice and he also updates us on Britain's latest cover-up. He explains the importance of FFAI grants through the Christmas Appeal, political pressure on the British through Congressional letters and hearings,and publicizing the truth about British injustice across America. The latest British plan on legacy killings … END_OF_DOCUMENT_TOKEN_TO_BE_REPLACED

A chairde: FFAI ISSUES UPDATE A-Search continues for new Irish government coalition after Sinn Fein surprise in February election- Nearly two months after an election producing a three way split between, Fianna Fail, Sinn Fein and Fine Gael, the leader and composition of the new Irish government are still unknown. Sinn Féin gained 14 seats, and now holds 37,with Fianna Fail at 38,and Fine Gael at 35 seats. At least 80 seats are needed for a government majority and no party is close..The Dáil (Irish parliament)met on February 20th but no one had the votes to form a new government. Outgoing … END_OF_DOCUMENT_TOKEN_TO_BE_REPLACED

A chairde: FFAI ISSUES UPDATE A-Johnson has his Brexit majority - Boris Johnson picked up 47 seats and an overall majority more than 70 seats, which will empower him "to get Brexit done quickly." Meanwhile wins by nationalists and republicans in the north and the Scottish National Party in Scotland, kept Irish unity and Scottish independence on the agenda. Johnson called the British General Election after a series of parliamentary defeats blocked him from moving forward with Brexit and his renegotiated withdrawal agreement out of the European Union. He banked on winning an outright … END_OF_DOCUMENT_TOKEN_TO_BE_REPLACED

Nine days after British Prime Minister Boris Johnson announced plans to block prosecutions of British troopers for Troubles killings, the House Foreign Affairs Committee hosted a special briefing by Mark Thompson of Relatives for Justice and Professor Mark McGovern. Congressman Eliot Engel scheduled the briefing, attended by Congressmen, many Congressional aides, two observers from the Irish Embassy and an observer from the British Northern Ireland Office. Mr. Thompson from Belfast and Professor McGovern from Edge Hill University near Liverpool, urged Congress, to take a lead along with Irish … END_OF_DOCUMENT_TOKEN_TO_BE_REPLACED

Please donate to this year’s CHRISTMAS APPEAL. Together we can make a difference. All checks must be made out to “Ancient Order of Hibernians”. Payments should be sent to AOH-FFAI PO BOX 904 JEFFERSON VALLEY, NY 10535. Please refer to our Information Packet for more details. Click here for the 2019 Freedom For All Ireland Christmas Appeal Packet Your help for freedom for all Ireland is critical. Boris Johnson and the British government are stepping up efforts to deny truth to the families of victims murdered by the crown while starting new prosecutions against Irish Republicans. Brexit … END_OF_DOCUMENT_TOKEN_TO_BE_REPLACED 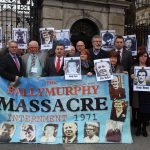 A chairde The House Foreign Affairs Committee has agreed to host an AOH requested briefing of Congressmen by Mark Thompson and Mark McGovern on November 20th open to Friends of Ireland or other members and staff.(see attached) In addition both men will be available in Washington on the 19th and 20th for individual briefings of Congressmen as part of their six state AOH FFAI TOUR. The Committee will host the event but stress that members of Congress only attend these briefings or hold individual meetings if they think it is important for constituents. That means AOH -LAOH and other … END_OF_DOCUMENT_TOKEN_TO_BE_REPLACED 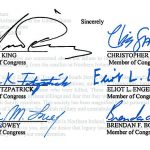 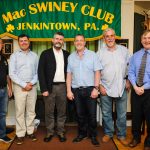 "You can argue whether the British government was justified in using loyalists to carry out murders in Tyrone and South Derry but it is just not credible to pretend state force collusion never happened." Professor Mark McGovern, joined by Mark Thompson of Relatives for Justice, made that point to Congressmen, public officials and Irish Americans in a seven state American launch of COLLUSION COUNTERINSURGENCY in NORTHERN IRELAND, organized by the Ancient Order of Hibernians with Relatives for Justice. CLAIM For decades nationalists in Tyrone, south Derry and across the north saw British … END_OF_DOCUMENT_TOKEN_TO_BE_REPLACED 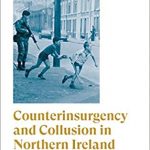 Tyrone victims' relatives are appealing for support for this week’s AOH sponsored launches of the book Counterinsurgency and Collusion. As Professor Mark McGovern of Edge Hill University in England joined by Mark Thompson of Relatives for Justice flew to America to begin a multistate tour on Sunday in Philadelphia, Tyrone families made their appeal to underline the importance of American support in their battle for justice. Poilin Quinn, sister of John Quinn murdered by the UVF alongside three other men in Cappagh, County Tyrone, on March 3rd 1991, said:  “This book tells the definitive … END_OF_DOCUMENT_TOKEN_TO_BE_REPLACED