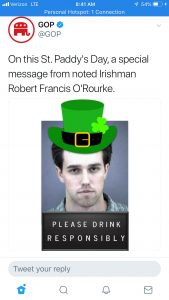 The Ancient Order of Hibernians are shocked and appalled that on St. Patrick’s Day, a day when America celebrates and honors the contributions that Irish Americans have made to our great country, the GOP would launch an attack on a prospective presidential candidate based solely on his Irish Heritage.

On 3/17 at 12:16 PM the GOP twitter account tweeted a mug shot of candidate “Beto” O’Rourke taken during a 1998 DWI arrest wearing a photoshopped green top hat and shamrock and a caption “Please Drink Responsibly.”  The tweet then states “On this St, Paddy’s Day [sic] a message from noted Irishman Robert Francis O’Rourke.”

Such a scurrilous, stereotype laced  attack is more in keeping with the 19th century “Native American Party”, aka “The Know Nothings”, then the party of Lincoln who wept when he kissed a regimental flag of the Irish Brigade in honor of the sacrifice that so many sons of Erin had made in America’s Civil War.  This offensive meme is nothing more than a 21st-century version of the scurrilous anti-Irish cartoons of Thomas Nast.  As America’s oldest and largest Irish Catholic organization, founded in 1836 in response to anti-Irish bigotry, the Hibernians had hoped that the days when a candidate’s Irish ancestry would be used as a campaign fodder were confined to the dark past; that today American political debate focuses on the issues, not the ancestry of a candidate.  Sadly, this toxic tweet from the GOP proves we were optimistic and premature in our beliefs.