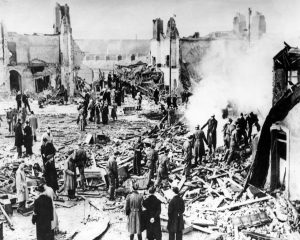 The city of Dublin is no stranger to bombs, from the British assault in 1916 to the removal of Lord Nelson’s statue in 1966 on the 50th anniversary of the Easter Rising. Yet one that has largely been forgotten occurred 78 years ago in 1941 during WWII, referred to as ‘the Emergency’ in Ireland. The story began in April when German air raids bombed Belfast. The Belfast Blitz consisted of four German air raids on strategic targets in the city of Belfast causing high casualties. The first was on the night of 7–8 April 1941, a small attack which probably took place only to test Belfast’s defenses which were woefully inadequate despite the fact that Harland and Wolff were building aircraft carriers and cruisers, Short Brothers built the Stirling long-range heavy bomber, James Mackie & Sons supplied anti-aircraft shells, Harland’s Engineering built tanks and a number of flax spinning mills made Aero linen for covering aircraft like the Hawker Hurricane and military gliders. Other Belfast factories manufactured gun mountings, ordnance pieces, aircraft parts and ammunition. These war materials and food were sent on ships from Belfast to Britain, some illegally flying the tricolor of neutral Ireland as a cover.

Having determined the city’s defenses were sparse, the next raid took place on Easter Tuesday, 15 April as 200 Luftwaffe bombers attacked military and manufacturing targets. More than 900 lives were lost, 1,500 people were injured, 400 of them seriously. Fifty-thousand houses, more than half the houses in the city, were damaged. Eleven churches, two hospitals and two schools were destroyed. Apart from the raids on London, this was the greatest loss of life in any night raids during the Blitz. The third raid took place on the night of 4–5 May; 150 were killed. Incendiary bombs predominated in this raid. The fourth and final Belfast raid took place on the following night, 5–6 May. In total over 1,300 houses were demolished, some 5,000 badly damaged, nearly 30,000 slightly damaged while 20,000 required repair.

Taoiseach Eamon deValera, head of the Irish government had declared his country’s neutrality during the war, but ordered all Dublin fire brigades, but one, to assist Belfast in putting out the resulting fires. According to David Lawlor on thewildgeese.com (May 28, 2016) Noel Brady on Dublin’s North Strand area heard the drone of a Luftwaffe bomber flying overhead on May 31, 1941 followed by a huge explosion. Noel was 21 at the time and a member of the St John Ambulance Brigade. He grabbed his bicycle and raced to the scene and treated the injured in rubble-strewn streets for the next 12 hours. At least 28 were killed, 90 injured and 300 homes damaged. It was the worst of seven bombings that took place in neutral Ireland during The Emergency. In total, four bombs had been dropped. The first one fell on the suburb of Ballybough, destroying two houses. The second dropped near the President’s residence in the Phoenix Park, shattering some windows, while the third fell on the North Circular Road. Miraculously, nobody was hurt. Reports later described how the German aircraft that dropped the deadly cargo had circled the city for some time, making low passes across what is now Connolly railway station ‘as if awaiting instructions of some sort.’ Historian Liam Murphy noted in thewildgese.com that, ‘In 1971, while in grad school in Dublin, I was told that this bombing of Dublin was intended to send a message to deValera to not send the Dublin Fire Brigade to the North when the Germans were bombing ‘British’ targets.’

Malicious rumors were immediately circulated that the Irish had illuminated their homes in order to guide the Luftwaffe to Britain and some had simply overflown their targets. That was a lie for the Germans had navigation instruments and guidance systems. Later, investigating those rumors with international aircraft pilots, we learned that distance and the curvature of the horizon made such assistance impossible. We further learned that when raids took place on moonlit nights, the Thames River became a ribbon of silver that led German pilots right into London! In addition to slanderous rumors, Churchill, enraged by deValera’s refusal to join the war effort, had imposed restrictions on trade with Ireland to deal a death-blow to the Irish economy. As the Irish introduced rationing of foodstuffs and essential raw materials, Britain even cut the vital supply of agricultural fertilizer! Petrol was cut stopping cars and buses and trains stopped running as the supply of British coal ended. As wheat production waned, an effort to preserve wheat supplies for bread caused the Irish government to restrict the malting of barley and banned the export of beer.

Quite unexpectedly, the British attitude shifted dramatically. It seems that the British army complained to Whitehall of unrest caused by a sudden beer shortage in Belfast. A hasty agreement was drawn up by which Britain would exchange badly needed wheat in exchange for Guinness! Guinness complained that they did not have enough coal to produce beer for an export market. To satisfy the demands of Allied troops north of the border, Britain agreed to release more coal. Slowly but surely, this pattern of barter repeated itself. In January 1942, the first of 300,000 American troops arrived to be stationed in Belfast and Derry during the course of the war. Britain finally agreed to release wheat, coal, fertilizers and agricultural machinery as long as the supply of Guinness was maintained. Thus was Ireland kept afloat (no pun intended) during The Emergency, enabling her to stay neutral.

More than 2,000 claims for compensation resulting from bomb damage were processed by the Irish government, eventually costing £344,000. After the war, West Germany accepted responsibility for the raids and by 1958 paid compensation of £327,000. to the Republic of Ireland using money from America’s Marshal Plan Aid.