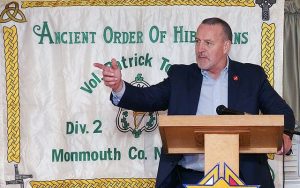 The Ancient Order of Hibernians wish to express their appreciation to President Trump for another stay of deportation for Malachy McAllister.   This stay would not have been possible without the direct involvement and untiring efforts of Senator Schumer, Senator Graham, Senator Menendez, Rep. Peter King, Rep. Eliot Engel, Rep. Bill Pascrell, Rep. Richie Neal, Rep. Chris Smith, other Senate and House supporters, and his Eminence Cardinal Dolan.  At a time when there is little common ground in Washington, that so many prominent figures in their respective parties and the Cardinal of the Archdiocese of New York should come together in common cause speaks volumes to the justice of the cause of Malachy McAllister and the inequity of current amnesty legislation.

The Hibernians earnest and heartfelt gratitude are tempered by the realization that this is a six-month reprieve and not a permanent resolution for the McAllister Family. For 23 years, Malachy McAllister has done nothing but positively contribute to the American community, including creating two successful, job creating, tax paying businesses. Despite being a prima facie example of the greatness of the American dream as a land of second opportunities, the McAllister family continues to live their lives in one year, and recently six month, intervals.

As Judge Maryanne Trump Barry (the older sister of President Donald Trump) noted in ruling on an earlier Malachy McAllister appeal “The problem here, though, is that Congress’s definition of ‘terrorist activity’ sweeps in not only the big guy but also the little guy who poses no risk to anyone. It sweeps in Malachy McAllister”.  If a man who was targeted by state security forces, whose child-filled home was sprayed with AK-47 fire, who has worked to support peace through the Good Friday Agreement, is not eligible for asylum then who is?  The Hibernians note that today’s regulations would deport Former Attorney General of New York Thomas Addis Emmet, Col. Michael Corcoran commanding officer of the ‘Fighting 69th’, General Thomas Francis Meagher commander of the renowned Irish Brigade, poet and journalist John Boyle O’Reilly and acclaimed actors Arthur Shields and George Brent.

Nothing can diminish the Hibernians profound gratitude for this six month stay.  However, it is also a call to action to permanently fix the problem and let Malachy McAllister and his family enjoy the peace and security that America has symbolized for generations of immigrants