The ancient Round Towers that dot the Irish landscape were erected by Irish Christian monks and can also be found in areas where they served like the two that stand in Scotland and one on the Isle of Man. However, in Ireland where they originated, about 120 are thought to have existed. Today most are in ruins, but 18 to 20 still stand in almost perfect condition. The history and purpose of the Towers are widely debated. Some believe that they were Bell Towers to call the faithful to prayer since they were mostly found near churches and monasteries. Some say they could have served as lookout posts, but the fact that many, like Glendalough, were built on sites unsuitable for surveying the countryside placing the watchtower theory in doubt. Historians familiar with the turbulent times in which they were built, between the 9th and 12th centuries, suggest that they were erected as a refuge for the monks and precious religious articles from rampaging Viking raids which occurred at that time. It also explains the entrance door being high above the ground for when attacks were imminent, the monks could enter the towers by a ladder which they would pull up behind them. The round, reinforced design of the towers made them nearly impenetrable to battering rams and because they were made of stone, they couldn’t be burned down. However, bonfires set at the base would have turned them into brick ovens much to the discomfort of the monks inside.

Generally found in the vicinity of a church or monastery, the door of the tower faced the west doorway of the church making it possible to determine without excavation the site of lost churches, where tower remains still exist. Most Round Towers in Ireland are located along the coast and near rivers further supporting the theory that they were protection from Viking raiders. The towers represent an age in which monks, according to the author Thomas Cahill, “saved Western civilization by hiding priceless manuscripts and books in round towers to rescue them from destruction.”

In modern times the Irish Round Tower has become a symbol of unbending cultural preservation and pride. Daniel O’Connell’s tomb at Glasnevin Cemetery had a Round Tower built above it as a memorial 22 years after his death in 1847. There are 198 steps to the top of that 180.5-foot tower and on a clear day you can see as far away as the Cooley Mountains and out to Ireland’s Eye. Even on a grey Dublin day there are panoramic views of the city since Glasnevin is one of the highest points in Dublin. Another ‘revival’ Round Tower was built in 1997 in the Island of Ireland Peace Park in Belgium as a war memorial to the soldiers of Ireland lost or wounded during World War I. That 110-foot replica of an Irish Round Tower was partially built with stone from a former army barracks in Tipperary. The modern Round Towers built as evidence of Irish pride differ in that the entrance is at ground level; they are not limited to Europe either, some have been erected in America. 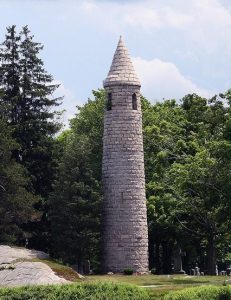 Father Patrick Cuddihy went to Milford, MA in 1857 to lead St. Mary of the Assumption Parish. He built a Round Tower on church property in 1895 as a reminder of home to those Irish immigrants who settled in Central Massachusetts. They built an extraordinary community based upon their faith, their culture and their desire to make a better life for themselves and their families, according to local historian Paul Curran. The St. Mary’s cemetery tower, which stands 73-feet tall, is made of Milford pink granite and was finished about 1896. The Round Tower stands at the cemetery entrance from Route I-495 to the Blackstone Valley Heritage National Corridor. In Father Cuddihy’s own words, “It may be folly, yet when you and I have passed away; the Irish in America will make a pilgrimage to the Irish Round Tower in Milford.” Yet it is not the only one in America! 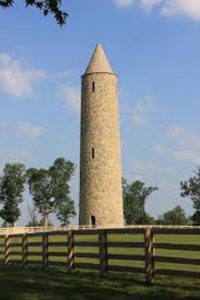 In 2001, Irish businessman and racing enthusiast, Tony Ryan, acquired a 200-year old, 1,000+ acre horse farm in Kentucky which he named Castleton Lyons Farm and returned it to its original use as a thoroughbred boarding and breeding farm. In 2002 he decided to add a Round Tower to serve as a beautiful reminder of Ireland. Constructed with fieldstone from the grounds that surround it, the tower is an exact replica of the Round Tower at the Rock of Cashel in Tipperary. The 124.5-foot structure is located in the middle of Castleton Lyons and its 144 winding steps lead to the top with windows along the way that face the north, south, east, and west. The tower can be seen by travelers flying into the Bluegrass Airport from the North and easily seen from the roads adjacent to the farm, especially at night when the tower is completely lit. Each year the farm celebrates St. Patrick’s Day by lighting the Tower in a festive bright green! Since its construction in 2003, the Tower at Castleton Lyons has become a familiar and beloved landmark to many residents and visitors to the Bluegrass State and a reminder of a culture that will never die!