“You can argue whether the British government was justified in using loyalists to carry out murders in Tyrone and South Derry but it is just not credible to pretend state force collusion never happened.” Professor Mark McGovern, joined by Mark Thompson of Relatives for Justice, made that point to Congressmen, public officials and Irish Americans in a seven state American launch of COLLUSION COUNTERINSURGENCY in NORTHERN IRELAND, organized by the Ancient Order of Hibernians with Relatives for Justice.

For decades nationalists in Tyrone, south Derry and across the north saw British state force involvement in the killings of their loved ones. Meanwhile the British dismissed any claims of collusion and accepted responsibility for only 10% of the north’s killings, those directly killed by British troopers or the Royal Ulster Constabulary.

Mark McGovern, Professor of Sociology at Edge Hill University in England, studied dozens of these killings in Tyrone and South Derry, applying academic research standards. Helped by Mark Thompson and Relatives for Justice, Professor McGovern was able to combine documentation compiled by victims’ families, with court transcripts and British military studies to put together a shocking new look at British collusion in the context of British military strategy.

The importance of American support was underlined by a special appeal by Tyrone victims’ families to relatives and friends in America to attend the AOH sponsored launch. 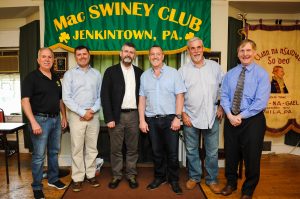 The tour opened at the historic MacSwiney Club in Philadelphia, because of connections to Carrickmore man Joe McGarrity, and to Liam Ryan, whose murder was one of those investigated in the book. The event began with presentations of a Congressional Proclamation from Congressman Brendan Boyle and a City Council presentation, congratulating the two men for opening a new chapter in the battle for legacy justice.

Mark Thompson, of Relatives for Justice outlined the facts of some of the cases investigated. He began with the example of Kathleen O’Hagan ,a pregnant woman killed in front of her children because her husband Paddy O’Hagan was a well known Republican. Mr. Thompson described the number of threats the family received, the remote area, timing and other circumstances which proved this and other horrific murders could not have been carried out without British direction. Ironically it was pointed out that Mrs. O’Hagan had family connections in America.

Mr. Thompson also pointed to Malachy McAllister, who helped organize the tour and who was targeted by the British for a loyalist assassination attempt by one of their agents. Malachy McAllister’s current fight against deportation was raised throughout the tour.

He said that American help from the AOH and other Irish American organizations was crucial if relatives of Britain’s victims were to have any chance for truth.

Professor Mark McGovern began by tracing the development of British military strategy in counterinsurgency back to 1896. He also cited the myths or “stories the British tell themselves to justify how they fight wars“. They say they use “minimum force” and “uphold law and order” while the actual strategy in colonial situations was to demoralize the population with murders and insure that those who carried out murder for the crown would never be caught.

Professor McGovern, then pointed to the evidence published in the da Silva Review, Stevens Inquiry, Ombudsman Investigations, and Court Transcripts etc. He spoke of his own research, family interviews and investigations in accordance with academic standards. He said “the evidence is now undeniable and it is just no longer credible to pretend Britain did not collude in these killings.”

Here as in other venues, people stood in line to buy autographed copies of the book, before the speakers took the floor.

Professor McGovern and Mark Thompson traveled to New York City for an event at O’Lunneys Time Square, where they were paraded in behind piper P. J. O’Hara.

A number of friends and relatives of the victims mentioned in the book attended. Liam Ryan’s sister Mary, and his friends Patrick Clarke and Gabriel Megahey, were called up to present a citation on behalf of Bronx Borough President Ruben Diaz, while Eamonn O’Brien presented a citation on behalf of Westchester County Legislator David Tubiolo.

Many key AOH and veteran Irish activists were introduced, including a number of relatives of victim John Quinn.

In Washington DC, Professor McGovern and Mark Thompson launched the book at the prestigious National Press Club in an event attended by Irish Embassy and British Northern Ireland Office representatives, as well as Congressional aides and Irish American leaders. They met Congressman Peter King to start a series of key Congressional briefings on Wednesday June 5th, before giving a briefing at the Irish Embassy on the need for Irish government help in the battle for legacy truth. They were joined at the Embassy by Peter Kissel of the IAUC and AOH National Freedom for all Ireland Chair Martin Galvin.

They held a launch in Virginia at Murphy’s Irish Pub in Old Town Alexandria. On Thursday, they appeared in Rutherford New Jersey in a special launch featuring Malachy McAllister and organized by AOH National Treasurer Sean Pender.

Professor McGovern and Mark Thompson were at the Watertown AOH Hall, near Boston on Friday, the Newport Rhode Island AOH Hall, on Saturday, and on Sunday June 9th at the Gaelic American Club, in Fairfield, Connecticut.

The response to the tour has been overwhelming, with hundreds of books purchased and forcing a reprint by the publisher.

“This book is an important chapter in the battle for legacy truth ,as victims’ families in Tyrone, south Derry and indeed across the north lived it. Loyalists may have fired the shots but British crown forces directed murders and protected killers as part of overall British planning. This book and these speakers have had a tremendous response in AOH sponsored events and in meetings with Congress.

“It says a great deal that victims’ families thought American help and the AOH important enough to come to us as soon as the book was released, to ask our help. The AOH is proud to stand behind them in the fight for legacy truth“. 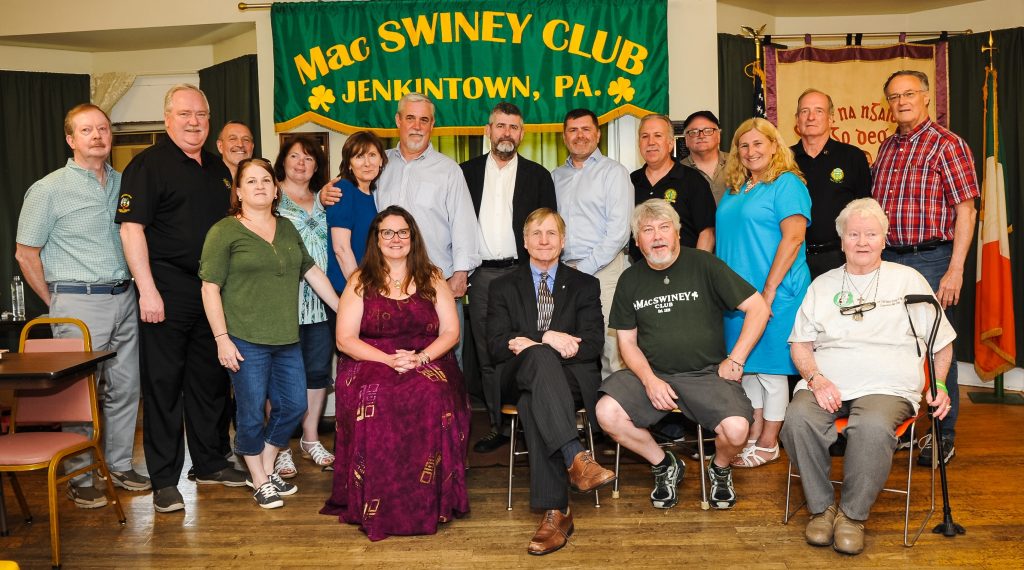