To All Hibernians:
The month of July is comprised of Ordinary Time in the liturgical calendar, the vestments being green.

The life of St. Serf, or Servanus, is rather murky, due to the number of legends and reworkings of old folk tales which have found their way into it. He may have owed his consecration to Palladius. Some think him the apostle of the Orkneys, though evidence that he labored there is slight. It is likely that he evangelized the Scots around Culross, Fifeshire, where he is buried.

The best surmise about this saint, also known as Rombaut, is that he hailed from Britain, though he is venerated in Ireland as a native of that land. He sojourned on the Continent, evangelizing in the area later known as Brabant. He may have been consecrated bishop by the pope. He was slain and tossed into a river by two men whom he had sought to dissuade from their evil deeds.

Palladius probably came from Roman Gaul or Britain. Having served as a deacon for some years, Palladius was consecrated bishop by Pope Celestine, in 431, and sent to be the first bishop of the Irish. After a year of little progress against stiff pagan resistance, Palladius departed for the land of the Picts, and was perhaps headed ultimately back to Rome, but he died among the Picts.

Kilian was an Irish monk who went with eleven companions to Franconia in Germany, witih a papal mandate to evangelize the area. At some point he was consecrated bishop. Kilian rebuked a local feudatory named Gosbert, a recent convert, for his irregular marriage. This brought about the slaying of Kilian and his companions, though accounts differ as to whether Gosbert was involved in this.

Considerable doubt exists about most of the story of this group. Supposedly fleeing some sort of trouble, they were shipwrecked on an island off the Norwegian coast, where they eventually perished. Their remains were discovered by King Olaf Tryggvason, c. 995, who was at the time engaged in Christianizing his kingdom. Sunniva’s body was said to be incorruptible, and a cultus developed around her and her companions during the Middle Ages.

Drostan was one of many Irish monks who crossed the sea to evangelize the Scots. He was the first abbot of Deer, in Aberdeenshire. He is also said to have lived as a hermit in Angus, noted for his holiness and kindness to the poor. 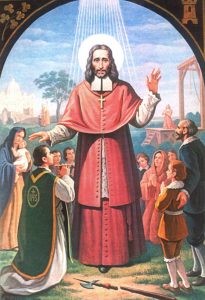 Oliver was born in County Meath, connected on his father’s side to the earls of Fingall, and on his mother’s (a Dillon), the earls of Roscommon. During the turbulent time of the rebellion in the British Isles against Charles I and the radical Protestant ascendancy which followed his execution, Oliver began studies for the priesthood at the Benedictine Abbey of St. Mary’s, Dublin, under his kinsman, Patrick Plunket. In 1645, he was sent to Rome for further study, earning a scholarly reputation at the new Irish College. After further studies in canon and civil law, he was ordained in 1654. There followed a busy life in Rome for twelve years, during which Plunket taught theology and served as a counselor to the Index and procurator at Rome for the Irish bishops.

In March, 1669, the archbishop of Armagh, Edward O’Reilly, died in exile. Pope Clement IX chose Plunket to succeed him and thought the time seemed opportune to return the Primate of All Ireland to Ireland. After consecration at Ghent, Plunket journeyed to London, where he was in contact with Charles II’s Catholic queen before travelling on to Dublin.

The Irish church was in sad shape, due to the penal laws and the Protestant ascendancy, but due also to ignorance, neglect, rivalry, timidity, and the presence of schismatic and disorderly elements within the church. Fortunately, due to various causes at that time, among them the Catholic leanings of the British monarch, Charles II (married to a Portuguese Catholic princess), there was a lessening of pressure upon Catholics in Ireland, and indeed throughout the British Isles. The Protestant viceroy of Ireland, Lord Berkeley of Stratton, was a fair and moderate man. Plunket also enjoyed cordial relations with the Protestant clergy in Ireland. The archbishop always had to be wary that his efforts did not open him to prosecution under the still-enforceable laws, but during this window of a few years, Plunket worked diligently to improve the state of his flock and put things in order.

In 1673, there was a fresh outbreak of persecution. Some of the Irish hierarchy fled or were banished; Plunket and some others operated from hiding. Things got worse after the Oates Plot of 1678. Archbishop Plunket was apprehended and imprisoned in Dublin Castle, and later in London’s Newgate, charged with supporting armed insurrection. The winding trail of Plunket’s prosecution is too much to follow in detail here; but the prosecution could not get an Irish grand jury to indict, no reliable witnesses were found, measures of questionable legality were forwarded. Most shameful of all, it was the perjured testimony of renegade Irish Catholics which brought about Plunket’s condemnation. He was sentenced to be hanged, drawn, and quartered. Plunket suffered martyrdom at Tyburn, the last Catholic martyr to die there. On the scaffold, Plunket proclaimed his innocence of fomenting armed insurrection and his loyalty to the king, and prayed for the king and for the people who had brought about his condemnation. The Archbishop’s remains have done some travelling; his body is now at Downside Abbey, while his head is at St. Peter’s, Drogheda. Plunket was canonized in 1975.

Declan was from County Wexford. Many miracles are ascribed to him, and two trips to Rome. He was said to have met St. David of Wales on one of these trips. His episcopal see was Ardmore.

And Patrick proceeded to the summit of the mountain, climbing Cruachan Aigli, and stayed there forty days and forty nights. (Book of Armagh)

In Ireland, the last Sunday of July is “Reek Sunday,” and marks the annual pilgrimage to the summit of Croagh Patrick, St. Patrick’s holy mountain, in County Mayo overlooking Clew Bay. St. Patrick is said to have spent Lent of the year 441 fasting and praying on the mountain.

–Brian Sims (D-Philadelphia), a Planned Parenthood volunteer, LGBT activist, and the first openly homosexual member of the Pennsylvania House of Representatives livestreamed (May 2) a video of himself confronting and berating a lone woman praying the rosary outside of a Philadelphia abortion clinic run by Planned Parenthood. He solicited her name and address and urged his followers to protest outside her house. Sims has been seen in other video clips exhibiting much the same behavior. His actions elicited comment from Archbishop Charles Chaput of Philadelphia, who called his actions unbecoming of an elected offical, and noted the irony of his alleged championing of women’s rights while, in one case, offering “a bounty for the identity and home addresses of three young ladies in order to encourage protests at their homes.” Currently, Sims is under investigation by the State Ethics Commission for alleged violations regarding acceptance of fees and accomodations for speaking engagements.

–Providence Rhode Island Bishop Thomas Tobin has been taking flak after his comments on social media (June 1) that Catholics should not to participating in events marking Gay Pride Month.

–Though he has over the years many times expressed his “pro-choice” inclinations, Senator Joe Biden (D-DE) has maintained support for the Hyde Amendment, which, when in force, has prohibited the use of most federal funds to support abortion. As a presidential hopeful, Biden has been taking heat for this from his competitors for the Democratic nomination. Now Biden has renounced his support for the Hyde Amendment.

–Illinois has become the latest state to follow the lead of New York into a radical abortion regime. On June 3, the State Senate passed legislation recognizing abortion as a “fundamental right.” The measure has already passed the lower house, and Governor J. B. Pritzker (D) has indicated a desire to sign it. The bill removes waiting periods and parental notification, allows partial birth abortion, lifts criminal penalties for abortionists, removes conscience protections for healthcare workers, prevents further state regulation, allows non-doctors to perform abortions, requires private insurers to cover elective abortions, and eliminates reporting requirements and regulations requiring investigation of maternal deaths due to abortion. The Catholic bishops of Illinois have decried the legislation and the way that it was rushed through the legislature.

–Reaction to the above was swift on the part of at least one Illinois bishop. On June 6, Springfield Bishop Thomas Paprocki instructed the priests of his diocese that Senate President John Cullerton (D) and House Speaker Michael J. Madigan (D) are not to be admitted to Communion in his diocese, since they have “obstinately persisted” in promoting abortion. He also warned other Catholic legislators who supported this measure that they must first go to Confession before approaching the rail for Communion.

–On June 12, Maine Governor Janet Mills (D) signed into law an assisted suicide measure, making it the ninth state to do so.

–On June 20, the Supreme Court ruled in favor of the American Legion, and against the American Humanist Association, in the case of the Bladensburg Cross in Maryland. The cross was erected following World War I by the American Legion and Gold Star Mothers to commemorate local men killed in the war. It has come under attack by atheist groups as an alleged establishment of religion. Justice Samuel Alito wrote the majority (7-2) opinion; Justices Ginsburg and Sotomayor dissented.

–A panel of the Ninth Circuit ruled June 21 that the Trump Administration’s new Title X rules adopted late last year may go into effect. The rules prohibit funding of clinics which perform abortions or refer for the same. Twenty states, as well as a number of local governments had brought suit on behalf of Planned Parenthood and other abortion providers to stop the rules. Planned Parenthood stands to lose about $60 million in federal funds. Planned Parenthood says that an appeal will be made.

–According to a state circuit court ruling June 24, Missouri’s only remaining abortion clinic may remain in business through June 28 while appealing the state’s revocation of its license. The revocation came as a response to the clinic’s failure to meet state medical standards.

[Sources consulted for this report include: Butler’s Lives of the Saints, complete edition, ed. and rev. by Herbert Thurston and Donald Attwater; 4 vols. (New York, 1956); The Liturgy of the Hours According to the Roman Rite (New York, 1975); The National Catholic Register; ewtn.com; catholic.org; priestsforlife.org.]