Brothers:
Just a quick abbreviated summary on the Brexit saga 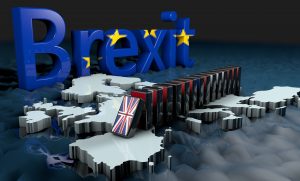 Brothers, this is “cloud cuckoo land” stuff, but you may ask, “Why as Irish Americans should we care?” Let us take the last part first. There can be no doubt that driving the 5th largest economy over a cliff will have a worldwide economic ripple, more accurately a tsunami, and that will impact everyone in the United States irrespective of ethnicity. As people committed to our heritage and the peace of the land of our ancestors, we cannot see two decades of peace and a developing understanding between the communities of Ireland reapportioned behind a “hard border”. Brexit threatens the most tangible accomplishment of the Good Friday Agreement, the economy of Northern Ireland. Destroy that and combine it with the lack of progress on other elements of the agreement and you have a recipe for a return to violence.

I ask you not to be taken in by some of the spin coming out of the British media and parroted by gullible and lazy US reporting. The problem with Brexit is not “an Irish issue” or even an “EU issue,” it is purely made in England. We all know the axiom, “You break it; you fix it.” There is no Irish Border problem now; Brexit has created it. The true and underreported tragedy is that this crisis is entirely unnecessary. The EU has said they would grant Northern Ireland “Special Status” to stay in the EU. This would respect the democratic mandate of the community of Northern Ireland to stay in the EU, remove the necessity of a border in Ireland, and allow Britain to pursue its Brexit agenda. It is a “win-win” for everyone except the loyalist Democratic Unionist Party (DUP) who would rather share in “Union” an economic disaster rather than risk a prosperity that may lead to a United Ireland.

The nonchalant attitude on the part of the Tory party is based on the prospect of a mammoth trade deal with the United States replacing the trade that will be lost from the EU. Like a friend who would take the keys off an acquaintance about to get behind the wheel of a car before they injure someone, a clear message must be sent that a US trade deal is off the table until a “no Brexit Border in Ireland” solution is delivered, especially when a solution is at hand and just needs political backbone to implement.