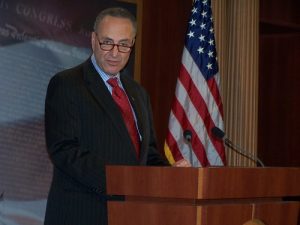 In response to a request made by the Ancient Order of Hibernians to members of Congress and the Senate to register their support for the Good Friday Agreement and their concern for the damage that a hard Brexit could pose to two decades of peace in Ireland, Senator Minority Leader Charles Schumer has written Secretary of State Pompeo and British Foreign Secretary Dominic Raab stating “He will vigorously and vociferously oppose any potential U.S.-U.K. trade deal that undermines the Good Friday Agreement or a return to a hard border.” Senator Schumer’s letter is available below.

The Hibernians thank Senator Schumer for his commitment to the Northern Ireland peace process and hope that many more Senators and Representatives will also communicate to the State Department and Members of the British Government that a U.K. trade deal can not come at the cost of the Good Friday Agreement.  We ask that all Hibernians contact their respective Senators and Congressional Representatives.

Much has been written and uttered recently about potential U.S./U.K. trade agreements after Brexit, including statements by officials of the United States government, that overstate the levels of support certain versions of such agreements would have in the Congress. While Britain is a unique and valued ally of our nation, as the Democratic Leader of the United States Senate, which would consider prospective new bi-lateral trade agreements, I write to express my inveterate opposition to any prospective trade deal with U.K. that either undermines the landmark Good Friday Agreement or facilitates a return to a hard border.

As we approach the fiftieth anniversary of the traumatic events that precipitated the long and difficult period known as “The Troubles”, all stakeholders would do well to reflect on the hate, violence, injustice, lawlessness, and societal upheaval of that time — and of the extraordinary transformation ushered in by the Good Friday Agreement.

America had a proud role in facilitating and brokering the Good Friday Agreement, and America remains a vital guarantor of it. This is no small responsibility and it must not be shirked. Indeed this policy is broadly and deeply supported in the Irish-American community, which is keenly following the coming resolution of the U.K’s Brexit decision – Senator Schumer.

America had a proud role in facilitating and brokering the Good Friday Agreement, and America remains a vital guarantor of it. This is no small responsibility and it must not be shirked. Indeed this policy is broadly and deeply supported in the Irish-American community, which is keenly following the coming resolution of the U.K’s Brexit decision.

All stakeholders from Northern Ireland’s various communities and traditions, as well as the Republic of Ireland and Britain, worked mightily to forge a framework that made possible a new future for the people of Northern Ireland, one that pivoted away from endless cycles of toxic violence, institutionalized discrimination, and state-repression, to a path of peace and politics based on a power-sharing agreement, a foundation of mutual respect, local rule, and a demilitarized and free border.

The free and demilitarized border on the island of Ireland between the Republic of Ireland and Northern Ireland is one of the precious products of that framework. Currently, upwards of 35,000 people commute daily over this now-invisible line that was once covered with razor wire and armored cars. This radical change has unleashed significant economic energy and facilitated deep societal interconnection. It is not surprising, then, that 56% of the people of Northern Ireland voted against Brexit.

The Good Friday Agreement is a towering achievement of diplomacy and it planted the seeds of a society based on mutual respect and equality, rather than one based on distrust and discrimination. It has been an imperfect and often difficult road, and much work remains to be done, but its success is self-evident and profound. In fact, it is the envy of other conflict-ridden areas around the globe, that also seek ways to pivot to peace — and to experience the prosperity and the realization of human potential that comes with it.

The notion that America would now endorse a policy or agreement that undermines the success of the Good Friday Agreement is profoundly counterproductive and risks exacerbating sectarian polarization and eroding self-determination — and unleashing the potential for violence that comes with that reality. This cannot be allowed to happen. Plainly stated, America should not be in the business of handing out a blank check that bankrupts the peace, security, self-determination and shared prosperity precipitated by the Good Friday Agreement. America’s policy should be to realize the full potential of the Good Friday Agreement, not to erode it or entertain the possibility of a return of a hard border or direct rule.

In this, I stand shoulder-to-shoulder with the bi-partisan, bi-cameral supporters of the Good Friday Agreement (and opponents of a return to a hard border), especially including Speaker Nancy Pelosi, and will do all in my power to work in a bi-partisan way to prevent such pact from receiving the approval of Congress.

I look forward to engaging with fellow members of Congress, the administration and the primary stakeholders, including the U.K., the Republic of Ireland, the various parties from Northern Ireland, and the Irish American community to craft policies that nurture and grow the full potential of the Good Friday Agreement and a future of shared prosperity.