In 1920, Ireland was in the midst of a War of Independence led by Michael Collins and the original Irish Republican Army formed from post-1916 Volunteers, Hibernian Rifles and returned prisoners who’d been illegally interned after the Easter Rising. On 11 November 1919 the British government had recruited returning veterans from the recently ended Great War to strengthen the Royal Irish Constabulary (police) in Ireland and oppose the IRA. They advertized for men willing to ‘face a rough and dangerous task’ in Ireland. Many just returned from the war found unemployment and few firms needing men whose primary skill was combat so they replied to the ad simply for the ten shillings a day in wages. Little training was provided to convert men trained in battlefield tactics to perform police functions as their heavy-handed tactics against the civilian population soon showed. They treated any opponent as the enemy and operated with a significant amount of brutality. Searches, shootings, and ambushes were a daily occurrence and the Irish people showed their disdain for England’s new police. A lack of sufficient uniforms led them to adopt dark RIC jackets over khaki pants and the people denounced them as the Black and Tans after a pack of similarly marked Limerick hunting hounds. They arrived on 25 March, 1920 and were fought to a standstill. The British then set up another unit called Auxiliaries or Auxies, consisting of ex-army Officers. However, most well-to-do Sandhurst trained officers simply returned to their estates leaving many officers who applied to come from the ranks who had earned battlefield commissions. Both set out to break the IRA and their supporters. While the Black and Tans were to back up the RIC in a defensive-reactive role, the Auxies were heavily armed, mobile units meant for offensive operations in the Irish countryside to hunt down and destroy IRA units.

It was therefore not unusual when a British lorry arrived at Monk’s bakery on Dublin’s Upper Church Street at 11:30 AM on September 20, to find it heavily guarded by armed military. As the soldiers loaded supplies, a voice from the street called, “Drop your rifles and put up your hands.” It was a group of IRA men. Suddenly, one of the soldiers fired, then a fusillade erupted as IRA and soldiers dueled with revolvers and rifles. When it was over, one soldier was killed and four wounded, and the IRA men melted away into the crowd. The British spotted a young man hiding under their lorry and pulled him out, threw him in the back with their wounded and sped off. An official statement later from British HQ stated that, “One of the aggressors had been arrested.”

The aggressor, as it turned out, was an 18-year old medical student named Kevin Barry. Kevin had joined the Irish Volunteers when he was only 15. His job was to cycle to various parts of the city delivering communications between officers of the movement. As a result, he knew all the leaders and their locations. Kevin was from a nationalist family; his mother was a Dowling from northeast Carlow, where the Barrys and Dowlings played their part in 1798. Kevin’s older brother Mick was Officer in Charge of the Volunteers in Toombeagh, Co Carlow and his sister Shiela was in Cumann na mBan – the IRA Ladies Auxiliary. The British Barry was a courier for the movement and knew that they had a prize catch.

The questioning and physical persuasion were intense: “Who were his companions? Name the officers of the Volunteers? Where was their Headquarters?” Kevin refused to betray the movement. He was offered amnesty and freedom, yet he refused. Tortured for days on end, he still refused. The British had never seen such determination in one so young. His mother visited him, and reported that his arm was in a sling as a result of the beatings he received. Finally, Kevin was charged with murder. At a secret Courts Martial, he was convicted and sentenced to death by hanging.

A reprieve movement focused world-wide attention on the injustice of British rule in Ireland intensifying pressure on England to release the young student, but still no repeal. Late at night, Kevin was taken to the Execution Chamber, an ordinary room on the second floor of the prison with a rope hanging from a beam in the roof and a trap door in the floor, to see where he would end his life the following morning. With incredible cruelty and mental coercion, he was promised a full pardon, tuition paid at Medical school and a pension for life if he would only reveal the names of his officers and comrades. Kevin, visibly shaken, glanced up at the beam from which hung the noose and said, “I think that should bear my weight.” 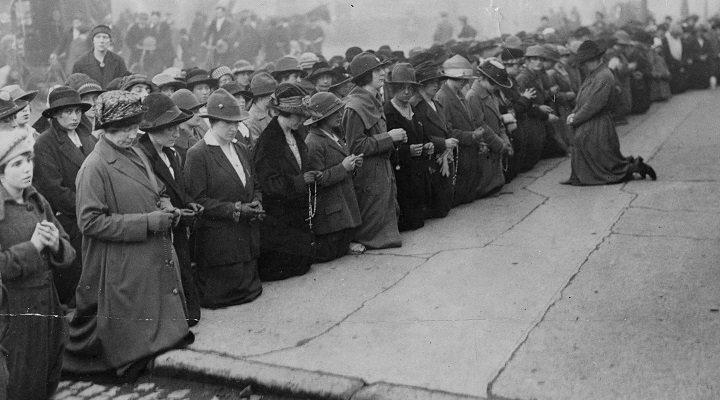 At 8 AM on November 1, All Saints Day, with the streets around Mountjoy Jail filled with women kneeling in prayer for him, 18-year-old Kevin Barry, his hands tied behind him, was led to the gallows where his short life was ended. Later, Father Albert, one of Kevin’s last visitors, reported that Kevin’s final message to Ireland and his comrades in arms, was, “Hold on, and stick to the Republic.” Kevin Barry’s life was over, but his influence had just begun. His name became a symbol and a slogan; a hymn to freedom and to unconquerable youth.

Meanwhile, 5,000 miles away at Dagshai prison in Jullendar, India, the following day, November 2, the 129-year old spirit of the bravest and proudest regiment in the British Army – The Connaught Rangers – died forever as 22-year-old Private James Joseph Daly of Tyrellspass, Co Westmeath was murdered by a British firing squad for leading a peaceful protest against British brutality in Ireland. But that’s another story!