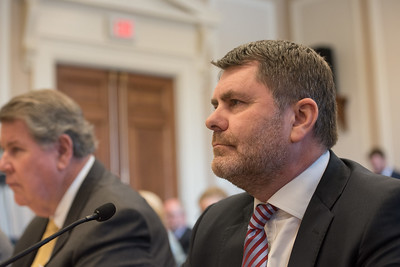 Nine days after British Prime Minister Boris Johnson announced plans to block prosecutions of British troopers for Troubles killings, the House Foreign Affairs Committee hosted a special briefing by Mark Thompson of Relatives for Justice and Professor Mark McGovern. Congressman Eliot Engel scheduled the briefing, attended by Congressmen, many Congressional aides, two observers from the Irish Embassy and an observer from the British Northern Ireland Office. Mr. Thompson from Belfast and Professor McGovern from Edge Hill University near Liverpool, urged Congress, to take a lead along with Irish America and the Irish government in opposing a trooper amnesty which would be a political disaster and violation of the Good Friday agreement.

Congressman Engel, a key Congressional leader on Irish issues, set-up the emergency briefing after requests from the Ancient Order of Hibernians about the disastrous legacy implications of Johnson’s amnesty announcement. The British Prime Minister made a campaign promise to amend the Human Rights Act, to cease applying to acts by British forces that took place before 2000, including murders during the Troubles.

The move would cut-off access to British courts for relatives of victims killed by British crown forces, and violate specific sections of the Good Friday Agreement where Britain pledged to put the European Convention of Human Rights into law for the north, with direct access to the courts.

Mark Thompson, a leading advocate for justice for relatives of those killed during the Troubles, was already in the United States on an AOH tour, which included major events in Chicago, Columbus Ohio, Philadelphia, New Jersey, Baltimore, Hartford, Albany, Peekskill and the Bronx. He traveled to Washington to speak at this crucial hearing and to back Malachy McAllister’s fight against deportation.

Professor Mark McGovern, author of the groundbreaking book, Counterinsurgency And Collusion In Northern Ireland flew to Washington to join him. The Ancient Order of Hibernians, joined by the Irish American Unity Conference, Irish Northern Aid and other Irish activists, urged representatives to attend the emergency briefing.

Committee Chair Eliot Engel opened the hearing by noting the importance of legacy justice as part of the Irish agenda then asked AOH representative Martin Galvin to introduce the two experts.

Mark Thompson in his opening statement, said the Good Friday Agreement was only achieved with critical American Congressional involvement. It provided for major human rights and equality reforms and signaled the end of conflict and the nationalist nightmare in the northern statelet.

“Regrettably the rights and entitlements of the GFA have not been realized in respect to legacy justice through continued British government bad faith supported by unionists who exercise a veto on rights being delivered”.

Mr. Thompson said “British bad faith on legacy had been a principle reason for the collapse of Stormont power-sharing executive. He cited examples including:

Mr. Thompson appealed for Congressional action to help get legacy justice for the relatives of victims.

Mark McGovern in opening remarks said “British attitudes about British soldiers accused of Troubles killings paralleled the undeserved, but deeply felt, sense of collective victimhood that underscored Brexit. In the same political quarters which imagined Britain as a force that must be unchained from Europe to reclaim itself, the British soldier accused of conflict killings has assumed the mantle of the victim”.

“The proposal to amend the 1998 Human Rights Act – which incorporated the European Convention on Human Rights into British domestic law – would mean it will no longer ‘apply to issues – including any death in the Northern Ireland Troubles – that took place before the Act came into force in 2000’.

Under House Foreign Affairs Committee rules all questions from the Congressmen are off the record to involve a full and free discussion. The Congressmen listened asked pointed questions and it was apparent they were deeply interested in how the British government was unilaterally breaking its Good Friday agreement pledges and what this would mean for victims’ relatives.

Congressman Engel has received other letters of support from Congressmen who could not attend but want to be part of any Congressional action taken.

Also present were Malachy McAllister and AOH National Treasurer Sean Pender, who took time out from lobbying to support the hearing witnesses because of the importance of this issue.

Martin Galvin, Freedom for all Ireland Committee Chair for the AOH noted:

“This Congressional hearing -the very fact that the British Prime Minister announces an Amnesty for British troopers on November 11th and within 9 days Irish America has taken it to Congress and is in front of the House Foreign Affairs Committee with two leading witnesses shows the importance of this issue to the AOH, and Irish American organizations like the Irish American Unity Conference, Irish Northern Aid and Brehons.

“Ongoing proceedings like the Ballymurphy Massacre Inquest, may result in judges recommending prosecutions of the murderers of a Catholic priest, grandmother and eight others.

“This week the Bronx AOH remembered the anniversary of the murder of former Bronx resident and American citizen Liam Ryan, by off-duty members of the British Ulster Defense Regiment in Tyrone on November 29th,1989.There is a request to have that murder investigated by the Ombudsman’s office in the north.

“Johnson is trying to block investigations or proceedings like Ballymurphy which reveal the truth about British troopers-so that families have no chance for justice.

“It is crucial for Irish America to join with Congressional representatives and the Irish government to stand behind the relatives denied justice in Ireland.”