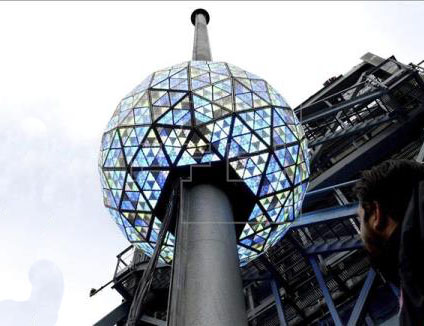 You saw it; I saw it; in fact, almost everyone on the planet saw it. I’m not talking about the moon or the sun, but something a whole lot brighter – at least for the Irish. It was the magnificent Waterford Crystal Ball atop Times Square in New York City that has become an icon of introducing a new year to millions of celebrants. Regardless of what time zone you may be in, you saw it, but did you know the connection of the Irish with that unique celebration?

New Year’s Eve in Times Square had been celebrated for many years as crowds assembled to cheer at midnight. In 1888, an Irishman named Patrick Sarsfield Gilmore decided to add music to the event. Back then, the triangle of land at the intersection of 7th Avenue, Broadway and 42nd Street was known as the Long Acre and there Galway-born Patrick Sarsfield Gilmore, leading the greatest Brass Band in America, performed for a large audience and then led them in a countdown, firing two pistols in the air at the stroke of midnight. The event became an annual tradition.

In 1904 the celebration was expanded with the opening of The New York Times whose owner had the Long Acre renamed Times Square in honor of the new Times Tower which stood thereon, That New Year’s Eve, the celebration began with a street festival and ended in a fireworks display. At midnight came the cheering of more than 200,000 attendees listening to the music that had become part of the tradition thanks to the late Patrick Sarsfield Gilmore. After Gilmore’s passing, the tune Auld Lang Syne (old long since), became part of New Year’s Eve in 1929 when Guy Lombardo played it on a New Year’s Eve radio broadcast. That song owes it origin to our Celtic cousin, the Scottish poet Robbie Burns, and added another Gaelic touch to the tradition.

However, the pre-eminent tradition became the dropping of a huge ball to mark the New Year. In 1907, the city banned the fireworks display so a 5-foot diameter, 700-pound iron and wood ball, adorned with a hundred 25-watt bulbs, was lowered from the tower flag pole exactly at midnight to welcome in 1908. A Ball has been lowered every year since, with the exceptions of 1942 and 1943, due to a wartime “blackout.” Yet, crowds still gathered and greeted the New Year with a minute of silence to the ringing of chimes from sound trucks to ring out the old and ring in the new.

In 1920, a 400-pound wrought-iron Ball replaced the original and in 1955, an aluminum Ball weighing just 150 pounds was used until 1980, when red light bulbs and the addition of a green stem converted the Ball into a big apple for an “I Love New York” marketing campaign. In 1988, after the Big Apple campaign, the traditional Ball with white lights returned. In 1995, the Ball was upgraded with aluminum skin, rhinestones and computer controls, but that was lowered for the last time in 1998. In 1999, for the coming Millennium, something really special was required and the New Year’s celebration returned to its Irish roots!

For the millennium celebration, the Ball was completely redesigned by Ireland’s Waterford Crystal company combining the latest in lighting technology with the most traditional of materials, reminding us of our past as we faced a new millennium. In 2007, the 100th anniversary of the Ball, Waterford Crystal crafted a spectacular new LED crystal Ball that increased the brightness and color capabilities. It measured six feet in diameter, weighed 1,070 pounds, and incorporated over 600 halogen bulbs, 504 crystal triangles, 96 strobe lights, and spinning mirrors. The ball went green in 2008, marking the centennial of its first appearance with an accidental nod to its Irish contributions. It was the fifth design: 6-foot in diameter; 1,212 pounds; lit by 9,567 energy-efficient LED lamps with computerized color patterns and made up of the same Waterford crystal panels.

This kaleidoscopic sphere, twice as large as its predecessor, is now a year-round attraction sparkling above Times Square in full public view January through December. As we welcome each new year with the descent of the Waterford Crystal Ball, think of the Celtic connection to that unique icon that is viewed around the world and stand a wee bit taller!