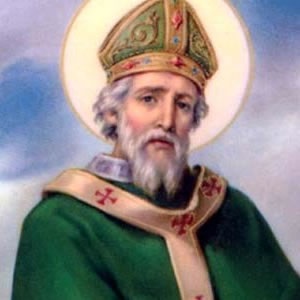 Each year around March 17, the name of St. Patrick appears in every major publication in the civilized world – sometimes with honor and sometimes with scorn – often due to the conduct of those who celebrate his memory at affairs which bear his name. Of the many things written about this holy man, some are true, some misleading, and some false. St. Patrick was Italian; St. Patrick drove the snakes from Ireland; St. Patrick was the first to bring Christianity to Ireland – all of these statements are false! Let’s take them one at a time.

Some claim St. Patrick to be Italian because he was born in Roman occupied territory and his name was Patricius. The mists of time have clouded the exact location of his birth, but what is known from available evidence is that he was born somewhere in Wales around 386 AD. His father was part of the governing body (Decurian) and a Christian Deacon while, according to the Catholic Encyclopedia, his mother, Conchessa was related to St. Martin of Tours. Although Wales was part of the Roman Empire at that time, it was a Celtic country and its people were one race with the people of Ireland, Scotland, Brittany, Cornwall, and the Isle of Man. As for his Italian sounding name, it was given to him when he was consecrated Bishop and assigned to the mission in Ireland. Before that time, our patron Saint’s name was Maewyn Succat, a very Celtic name. There is, therefore, more evidence to suggest that Patrick was Celtic, than any other nationality. 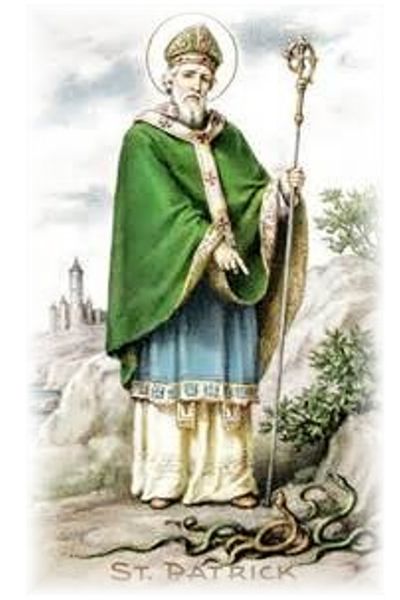 As for the snakes, although a popular legend, it is geologically known that there never were any in Ireland to begin with. His connection with that legend stems from the Church’s representation of the Devil in the form of a serpent, and artistic representations of Patrick driving the Devil out of Ireland in that form. (Artistic presentations also put belly buttons on Adam and Eve!) The fact that there were no snakes led to the question, “what happened to them,” and the answer was easily found in St Patrick’s traditional statue.

As for being the first to bring Christianity to Ireland, there were several missionary priests there before him, but he was sent by Rome to co-ordinate their activities and form a national Irish Church, which he did so successfully that it became the Isle of Saints and Scholars and re-educated the whole of Europe after the Dark ages. It is also said that he used the shamrock to explain the blessed Trinity which is totally false. The first written mention of the link does not appear until 1681, in the account of Thomas Dineley, an English traveler to Ireland. To the Celts, three was a powerful symbol as many single things came in threes as in nature (sea, land and sky), existence (birth, life and death) or elements (rain, wind and fire). There are even triads in Irish lore such as the three things to most beware of: the horn of a bull, the bark of a dog and the word of an Englishman. When Patrick explained the single God in terms of three, he didn’t need a shamrock.

Another tradition is that Corned Beef and Cabbage is an Irish dish. It is a definite Irish-American tradition – the Irish would be more familiar with Bacon or ham and Cabbage. When many downtrodden Irish, escaping the Great Hunger, settled in New York, they were forced into the slums of the lower east side around the notorious Five Points. Unskilled and unschooled, they tried to scratch out a living and send a few pennies back to those they were forced to leave behind. Personal gain eluded them as prejudice and No Irish Need Apply signs hindered their climb to economic stability, yet they persevered and eventually succeeded against incredible odds. Among the hardships they endured in a slum environment was the lack of nourishing food. It was generally up to the mother to prepare a healthy meal for her family and in this situation, her ingenuity left us a tradition. In the mid-19th century, New York was a major port in the China tea trade and a trip to China and back would take about nine months. However, an unlucky ship could spend additional time crossing due to calms, squalls and shifting winds. Carrying a crew of 50 to 60 men, ships were provisioned before leaving New York with enough fresh water, flat bread, oats, coffee, rum and salted beef to last until they reached China. After gastric complaints about re-provisioning in China for the trip home, many began to carry double provisions for the round trip. Upon arrival back in New York, the excess lumps of beef, that had been soaking in brine for 9 months, were sold to Irish mothers seeking nourishment for their families at a penny a pound. 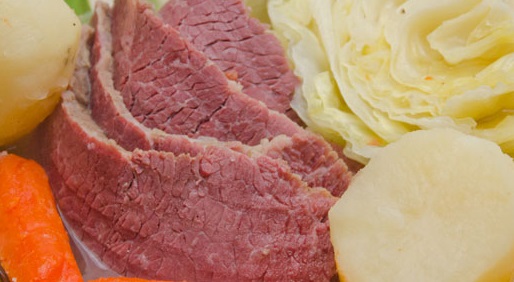 They took it home and prepared it so that their families would have meat, at least when their ships came in, giving rise to an old expression. They would boil the beef to remove the salt, discard the water and boil it again. They found that repeating that process three times – once each for the Father, Son and Holy Ghost – would remove enough salt to make it palatable, however, while the salt was gone, so was the flavor! That’s when a head of cabbage was added. The last time the beef was boiled, it was boiled in water that had boiled a head of cabbage and a flavor was introduced to the meat. It was a far cry from the bacon and cabbage they might have enjoyed in Ireland, but still it was a welcome dish. In later years, the dish became a nostalgic tradition for it brought back memories of a mother’s love although the modern dish is more palatable than the one mom prepared in a Five Points kitchen, but unless it was boiled in Cabbage water, it’s not authentic. On Saint Patrick’s Day, many people enjoy corned beef and cabbage believing it to be an Irish dish. In a manner of speaking it is, but it should not remind us of Ireland. Rather it should remind us of the ingenuity of Irish mothers, their dedication to their families and their determination to overcome any obstacles put in their path. It should also remind us of the hardships endured by our immigrant ancestors so that today we can enjoy a dish of corned beef and cabbage in pleasant company and surroundings.