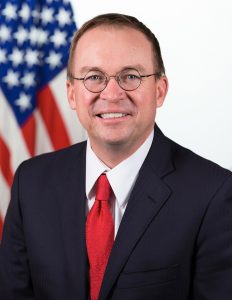 The Ancient Order of Hibernians wish to congratulate Mr. Mulvaney on his appointment as Special Envoy to Northern Ireland. The Hibernians also thank President Trump for fulfilling his promised commitment to maintaining this crucial diplomatic position, reaffirming the United States’ commitment to the Good Friday Agreement and the Northern Ireland peace process.
It is highly appropriate that President Trump has announced this appointment shortly after proclaiming March as “Irish American Heritage Month”; a time when America reflects on the oldest of American “special relationships,” that between the United States and Ireland. It is a time when we are reminded of Washington’s words, “Ireland, thou friend of my country in my country’s most friendless days.” In 1771, five years before the Declaration of Independence, Benjamin Franklin during his visit to Dublin was accorded the unique honor of sitting with the members of the Irish parliament; Franklin later wrote, “I found them (the Irish) disposed to be friends of America.”
It is in recognition of this friendship, and the fact that in the age of Brexit the isle of Ireland and the landmark Good Friday Agreement are at an inflection point in history, that the appointment of Mr. Mulvaney to the post of Special Envoy to Northern Ireland is both welcomed and imperative. The Ancient Order of Hibernians are disappointed that the appointment of Mr. Mulvaney as Special Envoy to Northern Ireland and its significance has been conspicuously absent from American reporting on the recent administration reorganization. We believe the appointment of a former presidential chief-of-staff to the role of Northern Ireland Special Envoy signifies a renewed seriousness and commitment by the United States to a lasting peace based on justice and parity of esteem in Ireland.
The Hibernians again offer their congratulations and appreciation for the appointment of Mr. Mulvaney to the post of Special Envoy and extend to him our support.
Share List
Posting....