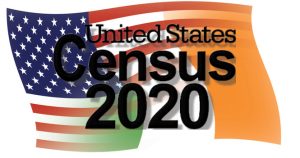 Amidst the current healthcare crisis, we can not lose the importance of the United States Census to Irish America.  Results of the U.S. 2020 Census will influence individuals, communities, governments, for-profit entities, and nonprofit organizations throughout the next decade. Data obtained will inform decision-makers in all sectors and lead to the allocation of political power and financial resources.

For the first time in many years, the Census form will have a question on Ethnic Origins (question 9 for the Head of household, question 7 for remaining household members).  It is vitally important that every Irish American record their Irish ancestry and for all other household members when appropriate.

Sadly, we have seen many “pundits” claim that Irish America no longer exists; low “Irish” response to the Census Ethnic Origins question will only further that belief and see Irish American causes and concerns further deprioritized.  “The first rule of Politics is learning how to count.”  We have recently witnessed an unreasonable delay in the appointment of an ambassador to Ireland.  Out of 55,000 Diversity Visas given last year, the entire island of Ireland received 32; compare that to 435 from Fiji.   Indian nationals received over 38,000 employment-based green cards in 2018 and are, as per their right in a democracy,  using their political clout to ask for more.

If we as a community don’t make an effort to be counted, we will see even less traction on such vital causes as Immigration and Irish Reunification.  Far too many of our government educational and cultural institutions already ignore the contribution of the Irish, a low Irish American turnout on the census will give them further justification to do so as “they allocate funds to serve the largest communities.”

Many of us were disappointed that we could not make a public statement of our Irish pride this March as St. Patrick’s Day Festivities were canceled out of proper concern for the COVID-19 crisis.  Let us, therefore, resolve instead this year as a community to celebrate our Irish pride and “say it on the census.”