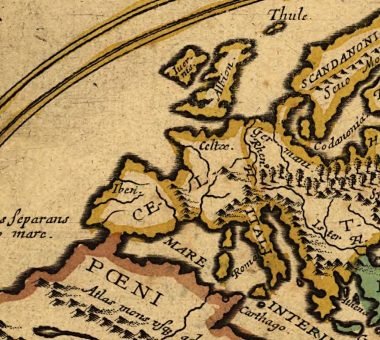 The term Iberian, as used by ancient authors, referred to the peninsula occupied by Spain and Portugal and may have come from the peninsula’s second longest river called Iber by the Greeks. Hecataeus of Miletus, an early Greek geographer and world map-maker was the first known to use the term Iberia at about 500 BC. The term also refers to the all the inhabitants of the Iberian peninsula, regardless of ethnic differences (Pre-Indo-European and Celtic). By the 6th century, the Iberians living on the eastern and southern coasts of the Peninsula traded across the Mediterranean and absorbed cultural influences from the Phoenicians, Greeks and Egyptians with whom they traded. In the north, central and western parts of the peninsula, the Celts were settled. They were explicitly mentioned as being Celts by several early classic authors like Strabo. There, Celtic culture predominated in numerous tribes as indicated by archaeology and their standard hill-top forts. Logically, there may have been some intercourse between the Celts and Iberians to produce a Celtiberian offspring. However, that was certainly limited since the Sierra Morena Mountains provided a partial barrier between the Iberian area and the rest of the peninsula and since both were tribal communities. Yet there is evidence of some cultural interaction such as the Celts using the Iberian alphabet.

Timing is also important. Waves of migrating Celtic peoples from the 8th century BC onward had settled heavily in northern and central Spain, penetrating Portugal and Galicia, but left the indigenous Iberian people of the south and east intact. These Celtic invaders were closely related to other Celts from Western Europe. The northern and central region holds the least Mediterranean ancestry DNA in Iberia, while there is northern African influence evident in the Southern and Western regions of the peninsula which had commercial and cultural relations with Mediterranean trading partners.

The modern Iberian Peninsula also attributes a level of ancestry originating in a long Moorish presence. The Moors were a nomadic people from North Africa; originally inhabitants of parts of Morocco and Algeria. In 711 AD, they invaded Spain, bringing their Islamic religion and culture with them; they inhabited two-thirds of the peninsula for 375 years, about half of it for another 160 years and finally just the kingdom of Granada for a remaining 244 years before being defeated by Ferdinand and Isabella on 1 January 1492.

However, all that was in the future at the time the ‘Milesians’ sailed to Ireland from the Iberian peninsula, circa 500 BC, most likely from Portugal which derived its name from port au galli (Port of the Gaels), since that part of western Iberia was still totally Celtic! To infer that the Celts who arrived from ‘Spain’ were descended from today’s Spanish people is one of the dangers of reading superficial accounts of history without delving into the minute details. Those who claim the black hair of some Irish as evidence of Spanish influence would be wise to realize that black hair is the most common of all human hair colors globally. It is a dominant genetic trait and is found in people of all backgrounds and ethnicities.

Then there are those who point to the destruction of Spain’s Armada off the western Irish coast and the survival of shipwrecked sailors who reached shore as a source a Spanish ancestry and we refer them to an article written in November, 2017 by Ireland’s archives entitled: Spanish Armada Shipwrecks along the Wild Atlantic Way. It revealed facts about the sailors lost on Ireland’s coast in September, 1588. Those who made it to shore landed in enemy territory and English troops and Irish loyalists stripped survivors of their possessions before turning them over to the Crown for a reward. However, there were Irish clans protecting survivors like the O’Rourke of Breifne (Cavan), McClancy of Rosclogher(Leitrim) and Redmond O’Gallagher of Derry who, at the behest of the three Hughs of Ulster – O’Neill, O’Donnell and Maguire – safely smuggled survivors back to Spain. Virtually none survived to settle down and wed Irish women since those few who escaped detection were more anxious to get out of enemy territory and back to home and family in Spain.

The history of Irish-Spanish relations show that they were always close from the trading alliance with Granuaille, Spanish aid to Ireland’s Catholics during the Nine Years War, sanctuary to Catholic Chieftains during the Flight of the Earls and even to the Irish who went to Spain to fight with Generalissimo Franco to defend the Church against Communists. (Google NYAOH.com/historicalhappenings for April 2019). So, despite the lack of ancestral DNA, it can be truly said that the Irish and Spanish have always been brothers in Christ.