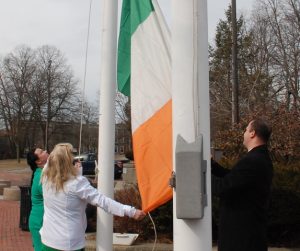 Irish Heritage Month 2020 kicked off on March 2nd, as it had for the past 40 plus years, with an Irish Flag raising on the North Common across from City Hall presided over by Lawrence Mayor Daniel Rivera. During the ceremonies Mayor Rivera presented Division 8 with a proclamation, declaring March as Irish Heritage Month in the City of Lawrence. The following Saturday night, March 7th, members of the Division, the Irish community, their families and friends, celebrated at the Division’s 149 Annual Saint Patrick’s Day Banquet and Dance. During the festivities, the Rt. Rev. Christopher J. Casey was named as the recipient of the Richard Cardinal Cushing Award, which is named after the late Catholic prelate who served as Archbishop of Boston from 1944 – 1970. Mark J. Alaimo was selected as Division 8’s 2020 Irishman of the Year. The Irishman of the Year Award is the highest award that Division 8 can bestow on a member. 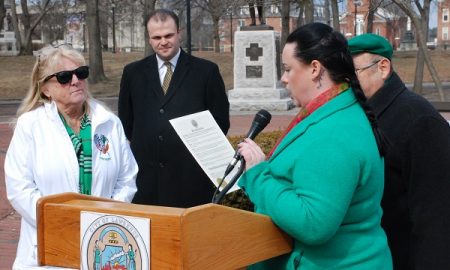 On Sunday, March 8, at the first of the Division’s 2020 Author/Lecture Series events was held, where Robin Gerry of New York discussed her book, “Healing the Family Heart Holes: A Genealogical Quest to Solve an Illegal Adoption Mystery Using DNA, Old Records, and Irish Luck” to a packed audience. Then Monday March 9th arrived, and the Irish world and our nation turned upside down with the chilling facts and the possible effects of the Covid – 19 virus. A year of planning for the multi-faceted remaining events on the Division’s Irish Heritage Month Calendar of activities were cancelled. 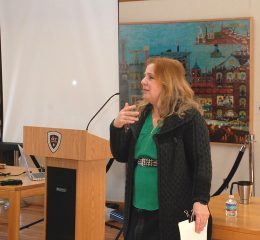 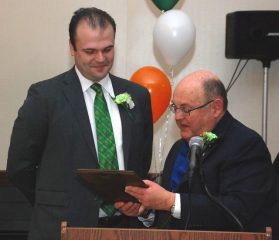 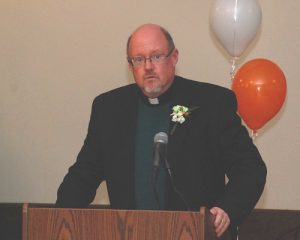 For the past 40 plus years the Division has celebrated Irish Heritage Month with a cadre of events, and 2020 was to be no different. The events usually include an Author/Lecture Series, Concerts, an Irish Flag Raising Ceremony, a Saint Patrick’s Banquet and Dance, a Saint Patrick’s Day Luncheon, a parade, an Irish Film Festival and events for children. The Division also normally hosts a month-long open house of their Irish Collection which consists of 20,000 plus Irish books, a DVD and CD Collection, Irish newspapers, magazines and memorabilia. Most of these planned events were now history, even before they took place.

Division 8 has been the home of three National Presidents, three National Directors, numerous appointed National Officers, Massachusetts State Presidents, State Officers, Essex County Presidents and County officers. It has a proud and rich history of Hibernian events and has contributed for over 40 years to the National Board’s Christmas Appeal.

Certainly, like all Hibernians across our great country, Division 8 members were disappointed to hear of the cancelation of its remaining March events, but as they say, you cannot keep a good Irishman down. Planning for Division 8’s 150th Anniversary Celebration in 2021 has already begun!

Congratulations to the officers and members of Division 8 AOH in Lawrence, Massachusetts for keeping our Hibernian traditions and culture alive in the true spirit of Friendship, Unity and Christian Charity. For 149 years, Division 8 has been dedicated to religion, heritage, charity and community, and as such makes us all proud to be members of the oldest, largest and greatest Irish Catholic organization in the United States, the AOH!