The month of May this year falls within the Easter season, the liturgical color being white, except on Pentecost Sunday, when it is red. The Ascension of the Lord, a solemnity and holy day of obligation, falls this year on May 21. Many dioceses of the United States transfer the Ascension to the following Sunday. As of this writing, most American dioceses remain in some version of a lockdown due to the pandemic, with Sunday and holy day Mass obligations suspended.

MAJOR SAINTS AND FEAST DAYS OF MAY

IRISH SAINTS OF MAY

St. Ultan, along with his sainted brothers, Fursey and Foillan, crossed over to East Anglia together. The East Anglian king, Sigebert I, gave them land at Burgh Castle, near Yarmouth, upon which they founded an abbey. The land was harried by raids from the pagan Mercians, and Fursey decided to leave for the Continent, where he died. Years later, Ulltan and Foillan stopped at their brother’s tomb at Peronne, on the way back from a Roman pilgrimage. They were encouraged to remain in Gaul by Blessed Ita and her daughter, St. Gertrude, who offered them land for a foundation at Fosses. Ultan became the abbot of Fosses, but was later abbot at Peronne, where he died. The saint received a revelation of the death of his brother Fursey at the hands of bandits, and he predicted the death of St. Gertrude.

Late in the fifth century, an Irish family group consisting of seven brothers and three sisters emigrated to Brittany, looking for an opportunity to serve God there. Gibrian was a priest and the eldest, their leader. They adopted an heremetical life near the Marne, close enough to each other to remain in contact. St. Gibrian died there after a life of prayer and austerity, and a chapel was erected at the site of his hermitage. His relics were removed to Rheims to save them from the Vikings, but they did not survive the destruction wrought by the French Revolution.

Also known as Cathal, this man was a scholarly monk who taught at Lismore. Catald resigned his post and went on a pilgrimage to Jerusalem. On his way home he was somehow chosen as second bishop of Taranto (Tarentum) in Italy, where he remains titular saint of the cathedral.

Conleth is also known as Conlaed, and is one of a number of early Irish saints who were said to be skilled workers in metal. He was living as a hermit at Old Connell on the Liffey when he made the acquaintance of St. Brigid. Brigid gave him an avenue for his artistic talents, and later his pastoral skills as well, after he was chosen bishop of Kildare. Conleth is considered by some the fashioner of a crozier presented to St. Finbar, which is preserved to this day. There is an odd story about his being devoured by wolves, but scholars consider it a legendary attempt to explain his name in Gaelic.

St. Comgall, born in Ulster, is considered one of the founders of Irish monasticism. After some years of tutelage under St. Fintan in the monastery of Cloneenagh and his ordination as a priest, Comgall retired to an island in Lough Erne with a few followers. The life of this community was so severe that Bishop Lugid, who had ordained Comgall, prevailed upon him to relax the rule in force there. Later, Comgall founded the great abbey of Bangor, which came to have about 3 thousand monks there and at daughter houses during Comgall’s reign. Many sought his spiritual mentorship, including St. Columban, who later carried many Bangor traditions to the Continent. The saint ventured overseas at least once on a missionary journey to the Picts of Scotland in the company of St. Colmcille. A metrical version of a monastic rule attributed to Comgall still exists.

St. Carthach seems to have adopted his name from his mentor, St. Carthach the Elder, to whom he was known as “Mochuda,” or “my Cuda,” the last evidently being his given name. He is also known as Carthage. He was a swineherd of Castlemaine, Kerry, till coming under the tutelage of his mentor, who trained him as a monk and ordained him. Carthach lived for a time as a hermit at a place named Kiltulagh, but local ecclesiastical rivalries led him to remove to Bangor where he was directed by St. Comgall. After visiting a number of other monasteries, Carthach eventually settled at Rahan in present County Offaly, c. 595, establishing an abbey which is said to have eventually grown to 800 monks. Carthach’s rule for that house is extant, though not likely in its original form. The saint may also have held the bishopric of Fircall. The life at Rahan was very austere, a fact perhaps supplying the motive of two unhappy inmates who attempted to drown Carthach. In 635, the community was broken up when the monks were expelled by Blathmac, a hostile chieftain. After some wandering, Carthach and his followers settled on the banks of the Blackwater, where, on land donated by a local prince, they established the great abbey and school of Lismore. Here again, Carthach is said to have served as abbot-bishop, and is regarded as the founder of the see of Lismore. The saint at some point withdrew from the business of abbey construction to a cave in a nearby glen–Mochuda’s Inch–where he died in 637.

Despite the fact that St. Brendan is one of the best known of Ireland’s saints, the true story of his life is so embellished with legend that it is hard to arrive at very many undisputed details. He was probably born near Tralee. Brendan was under the tutelage of several different spiritual mentors in his youth. He was probably ordained a priest before he became a monk. There is little undisputed evidence to support the story of his far-flung adventures at sea and across the North Atlantic; he probably did voyage to Scotland, and possibly Wales. The most reliable fact about him is that he established the abbey at Clonfert, about 559. Brendan supposedly established a rule for Clonfert, which was dictated to him by an angel. Brendan reputedly died at Enach Duin, where he had gone to visit his sister, Brig, who led a religious community of women there. One thing that is unquestionable about Brendan is that he made an enormous spiritual impression upon his contemporaries. 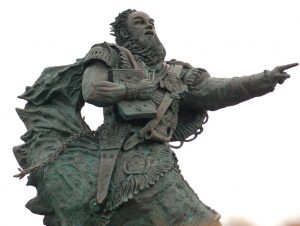 This saint, also known as Mauguille, was a companion of St. Fursey, and accompanied him first to Britain, then to Gaul. Following the death of his friend, Madelgisilus joined the monastic community of Saint-Riquier, later withdrawing to a hermit’s life. He had fallen seriously ill when he was discovered in this state by an English recluse named Vulgan, who nursed him back to health. The two became great friends and lived a solitary life not far from each other, dying around the same time.

Many state legislatures have not been in session, or have only been called into session to deal with emergency measures pertaining to the pandemic. Congress has been preoccupied with the virus as well. Many courts have resorted to remote practices. The Supreme Court will conduct a hearing by telephone in May in the continuing case of The Little Sisters of the Poor and the healthcare mandates. Actions by government, local, state, and federal, have elicited, and no doubt will continue to elicit, various disputes and issues, likely culminating at some point in legislation or judicial action. Some states have sought, with varying degrees of success, to shut down abortion clinics as nonessential services during the pandemic. Another thorny issue is the intersection of the freedom of religious practice–not to mention other civil liberties–and executive quarantine measures.

On consecutive weekends (April 17 and 24), President Trump has held conference calls with religious leaders, the second one exclusively with about 600 Catholics. The President talked of the value of religious education and touted Administration efforts to aid pandemic-stricken nonprofits through emergency loan plans. Several participants emphasized the importance of tax deductions and credits to foster educational choice. The President also touted his efforts to foster the cause of life and religious freedom, and spoke of the importance of opening religious worship as soon as possible. Shortly after his call with Catholic leaders, the President tweeted that he was planning to tune into Cardinal Dolan’s Sunday Mass from St. Patrick’s Cathedral.

Meanwhile, the White House Domestic Policy Council and CDC officials consulted (April 28 and 29) with the four Catholic bishops (in New Mexico, Texas, and Montana) who have announced the resumption of public Masses, to get a picture of best practices for resuming public worship while maintaining disease control. Officials emphasized that they want to make clear to state and local governments the critical importance of reopening public worship and pointed to the Attorney General’s recent warning that he is scrutinizing some state and local measures which appeared to target religious practice.

We Hibernians need to remember to continuing supporting our local parishes and Catholic charitable activities, either financially or through volunteer efforts. Please remember Project Saint Patrick: our seminarians, like all students, are trying to carry on with their preparation, often remotely. We need to check on neighbors and friends whom we know may be vulnerable for whatever reason. Stay connected: there are many web sources for Mass and devotions. In this month dedicated to Mary, perhaps praying the rosary is a practice we can all adopt.