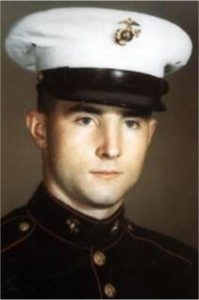 Patrick Gallagher was born in Derrintogher, County Mayo, Ireland, on February 2, 1944. At the age of eighteen, like so many you Irish men and women before him, Patrick immigrated to the United States and the promise of a new life filled with opportunity. He quickly started on the immigrant dream: studying law while working in real estate, even getting involved in local politics as a campaign worker for Senator Robert Kennedy.  In 1966, Patrick was drafted for service in Viet Nam. Despite pleas from a heartsick sister living in the states to avoid the horrors of war by merely returning to Ireland, Patrick was committed to his new home in America and instead swore her and other American relatives to secrecy to avoid worrying his family in Ireland. Patrick returned to Ireland to visit his family, where he told no one that upon his return he would be joining the United States Marines.

Patrick shipped out to Viet Nam as a member of Hotel Company, 2/4 Marines, 3rd Division. On the night of 18 July 1966, while serving in a forward position at Cam Lo with three other Marines who were sleeping, their position came under grenade attack by enemy forces. The first grenade Patrick was able to kick away where it exploded only to be followed by a second grenade that fell between two of his comrades. Without hesitation and in an unselfish act of valor, Gallagher threw himself on the grenade to personally absorb the full brunt of the explosion and save his comrades. Pinned under Gallagher’s body, the grenade failed to go off. Gallagher continued to lie on the grenade as his three comrades escaped the position despite the fact that two more enemy grenades were thrown into the position to explode around him. His comrades now in a place of safety and himself  still miraculously unhurt, G 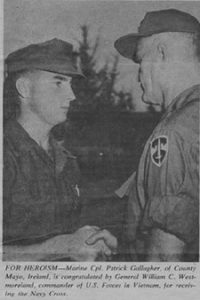 allagher then rolled off the grenade at his squad leader’s order and threw the grenade into the nearby river where it immediately exploded upon hitting the water. 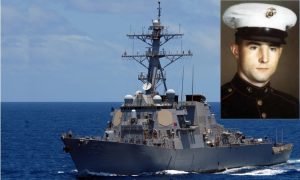 On March 13, 2018, it was announced that the Navy’s newest destroyer, DDG-127, would be christened the U.S.S. Gallagher.  The U.S.S. Gallagher will not only honor the life and service of Cpl. Gallagher but the 21 other immigrants whose names are inscribed on the Vietnam war memorial who though born in Ireland made the ultimate sacrifice for America; in naming a destroyer for Cpl. Gallagher Senator Schumer and Secretary Spencer have worthily honored them all.  The U.S.S. Gallagher will join her sister ships the U.S.S. Barry, named for Wexford immigrant Commodore John Barry who holds commission No. 1 in the United States Navy, and the U.S.S Michael Murphy, named for a descendant of Irish immigrants who was awarded the Medal of Honor posthumously in our Nation’s latest conflict.

Moves are still underway to award the Patrick Gallagher the Medal of Honor that he so justly deserves.