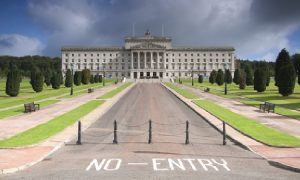 With the collapse today of talks seeking to restore the devolved Northern Ireland Government, the Ancient Order of Hibernians expressed their concern over the future of U.S. brokered Good Friday Agreement and renewed their calls for appointment of a U.S. Special Envoy to Northern Ireland

“The statement made today by DUP leader Arlene Foster that there is no prospect that continued negotiations will lead to a restoration of Northern Ireland’s power-sharing government indicate that the Good Friday Agreement (GFA) and the progress of the past twenty years are in dire peril.

For Ms. Foster and the DUP to raze the Northern Ireland government over the canard that an Irish Language Act is a “new demand” is unconscionable. The commitment to an Irish Language Act is stipulated in decades-old signed agreement and is another example of the DUP’s failure to act in good faith. The intransigence of the DUP to enact an Irish language act is a renunciation of their Good Friday obligation to act with “mutual respect for the identity and ethos of both communities and parity of esteem”. The DUP should no longer be enabled in their cynical attempts to reverse the roles of victim and offender by attacking those who seek nothing more than the fulfillment of their previous commitments.

The refusal of the DUP to meet with Taoiseach Leo Varadkar as he attempted to aid in negotiations is an arrogant repudiation of the Republic of Ireland as co-signer and partner in the Good Friday Agreement. That the DUP again demonstrated that they possess a veto over Prime Minister May’s Northern Ireland policy decisions highlights the absurdity that the British Government can simultaneously honor its GFA commitment to act with “rigorous impartiality” in Northern Ireland while dependent on ten DUP seats to cling to power.