In an open letter to the Congressional Friends of Ireland Caucus, the Ancient Order of Hibernians (AOH) asked for their support in calling for the British Government to honor its commitment to hold a referendum on the North of Ireland forming a part of a united Ireland in light of statements made by Prime Minister May indicating that the criteria for such a referendum have been met. 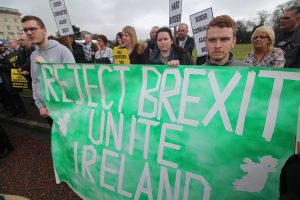 In a recent Brexit briefing to members of Parliament, Prime Minister May publicly stated she “cannot be confident on the politics of that situation, on how it plays out” if a referendum was held on Northern Ireland remaining in the U.K..  In short, to the Prime Minister, it appears likely “that a majority of those voting would express a wish that Northern Ireland should cease to be part of the United Kingdom and form part of a united Ireland”. Ms. May’s lack of confidence regarding the outcome of a Northern Ireland referendum belies a belief which meets the agreed criteria for triggering such a referendum.  While Ms. May is not herself the Northern Ireland Secretary, it would be unreasonable to believe that her subordinate’s perception of Northern Ireland would differ dramatically from her chief.  The Hibernians also note that in the Brexit referendum the people of Northern Ireland rejected leaving the European Union by a clear majority. Thus it would appear reasonable that many in the north of Ireland would favor becoming part of an E.U. member Ireland if given an opportunity to vote on it.  These facts, taken together, make a prima facie case that a referendum on a United Ireland should be called now.

The Hibernian’s feel that to not call for a referendum on Irish unity now given that the highest ranks of the British Government perceives a majority sentiment for a united Ireland would fatally undermine the remaining credibility of the Good Friday Agreement.  Britain’s commitment to the Agreement is already under serious question given the lack of fulfillment of its commitments on legacy issues and the growing prospect of a Brexit hard border again partitioning the isle of Ireland.  The Good Friday agreement is a landmark in conflict resolution and U.S. diplomacy, it is a source of hope to other nations mired in conflict; it must not be allowed to collapse.  The Hibernians therefore respectfully call on the Congressional Friends of Ireland Caucus to adopt a resolution calling for the fulfillment of the Good Friday Agreement commitment to hold a referendum that will allow the people of Northern Ireland to exercise their natural right of self-determination and to transmit a copy of said resolution to the U.K. Ambassador.”