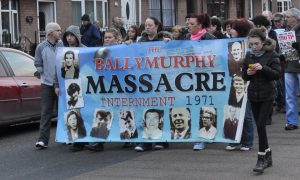 Saying “the ‘Ballymurphy Massacre’ families need American help in their 47 year battle for justice”, Carmel Quinn, a sister of one of 11 victims John Laverty, will begin a five state American tour as the Inquest opens in Belfast. The tour follows attacks by 150 Tory MPs and British Prime Minister Theresa May aimed at discrediting investigations of British forces for ‘Troubles’ killings in the north of Ireland. A founding member of the ‘Ballymurphy Massacre’ Campaign and member of Relatives for Justice, Carmel Quinn will ask for American help at public events and Congressional meetings in a tour organized by the Ancient Order of Hibernians and Relatives for Justice, but now assisted by a growing list of Irish-American groups.

Since August 1971 the Ballymurphy families have said that 11 people, including Catholic priest Fr. Hugh Mullan, and mother of 8 children Joan Connolly were murdered over a three day period. The British whitewashed these murders by smearing the victims. These families want their loved ones exonerated

by an Inquest with eyewitnesses and cross-examination of anyone claiming these killings were justified. They have met with repeated delays, jibes about “innocent victims” from DUP head Arlene Foster, and the deliberate cutoff of Inquest funding.

Last week 150 MPs called for an end of former British troopers being “hounded and pursued” by murder investigations, and Theresa May praised the ‘heroism’ of British crown forces who “upheld the law.” While not specifically referring to Ballymurphy, such claims may impact an Inquest considering whether British forces upheld the rule of law by 11 murders.

” The Ballymurphy Massacre is a fundamental test of Britain’s ability to give legacy justice. If victims cannot get justice where 11 people, including a Catholic priest and mother of 8 children were killed by British troops, how can we expect justice in any killings or collusion murders where British forces were involved? AOH National Vice-President Danny O’Connell and National Secretary Jere Cole recently promised the Ballymurphy families that America would stand behind them in their battle for justice. We are committed to keep that pledge”.

On Monday November12th, she will speak in New Jersey at the Bayshore Catholic Center 12 Rt. 36, Middletown at 7PM, organized by Sean Pender, Malachy McAllister and Rich O’Brien. (vp@njaoh.com)

Ms. Quinn will travel to Washington DC for a series of key Congressional briefings on Wednesday 14th and Thursday before returning to New York City for an event at O’Lunneys, 145 West 45th street November 15th. She will speak in Albany on Friday November 16th at the AOH Hall, 375 Ontario Avenue, Albany where the prestigious Fr. Murphy award will be presented.