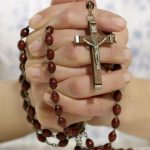 Among the core experiences in the story of St. Patrick, Apostle of Ireland, was his capture and enslavement for six years as a youth. He writes in his Confessio, that he believed his enslavement was a just punishment for having abandoned God. However, we know now that God abandons no one. We human beings are the ones who instead abandon God and bring sin to this earth. The desolation and despair felt by the sixteen-year-old Patrick matches what far too many young people today experience in the most formative years of their lives. The scandals surrounding the sexual abuse of minors and … END_OF_DOCUMENT_TOKEN_TO_BE_REPLACED 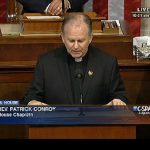 The tenth chapter of the Gospel of St. Matthew underscores the cost and requirements of proclaiming Jesus’s message to the Church. “One’s enemies will be those of his own household,” is the stark reality Christ presents those of us who would preach that gospel message. Those passages have become prescient in light of the recent forced resignation of House Chaplain, Fr. Patrick Conroy, S.J., by House Speaker and self-proclaimed devout Catholic, Paul Ryan of Wisconsin. Only twice in its history has the House of Representatives employed Roman Catholics as chaplains, and Fr. Conroy is the first … END_OF_DOCUMENT_TOKEN_TO_BE_REPLACED 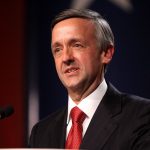 The Ancient Order of Hibernians was established in 1836 to protect and defend Our Holy Mother, the Roman Catholic Church, from the violence and bigotry of anti-Catholic nativist mobs. While violent physical attacks on our churches have become largely a thing of the past, bigotry and disdain for the Catholic Church has not vanished; it hides in the shadows where it nurses on the darkness until its next opportunity to spread the poison of prejudice. On Friday evening, October 21, President Trump through twitter promoted the work of Dr. Robert Jeffress, a megachurch pastor of First Baptist … END_OF_DOCUMENT_TOKEN_TO_BE_REPLACED